By Mark Holder - October 05, 2010
After the bell today, Yum! Brands (YUM) reported decent earnings. It's selling off slightly after hours because the guidance isn't as high as hoped but it's still very respectable. Only day traders would sell on this news. Commodity prices will clearly hurt them if they continue to rocket higher.

More importantly though is the Net Payout Yield. During the quarter, YUM hiked the dividend from $.21 to $.25 and bought back $283M worth of stock. No mention of the price paid so hopefully it was all during July when the stock was much lower. Annualized yield now jumps to over 4% and if you take the Q3 buyback numbers only it jumps to over 6%.

The yield is definitely more attractive now then in the recent past, but its concerning that the stock price is already at 52 week highs reducing the likelihood of follow through on the buyback. For now, Stone Fox will leave the position in YUM to roughly 2% of the Net Payout Yield Portfolio. The Q3 numbers remain impressive, but the valuation is challenging. 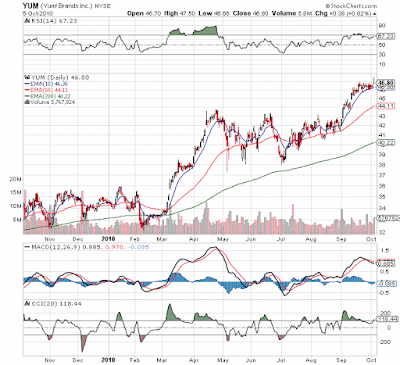