Showing posts from December, 2008
Show all

By Mark Holder - December 29, 2008
This little nugget is reported in the OC Register. You won't hear this news from the mainstream media, but we've been reporting on this for several months. The supply of homes in the epicenter of the housing problem of Orange County in California is declining at a fast rate. Inventory peaked at nearly 18K homes September 2007 and has steadily dropped to below 12K now. Whats really interesting is that houses under $750K have a reasonably low turnover of only 5 months. The critics would claim that houses are being held off the market due to the drastically lower prices, therefore, reducing inventories. In reality though, the lack of willing sellers at these levels combined with more buyers coming in at these low prices is what creates a bottom and a reversal in the market. The stats don't lie and they definitely show how inventory levels kept growing and peaked in the late summer when supply was too high, but in 2008 inventory peaked in March. Don't be surprised when CA
Post a Comment
Read more 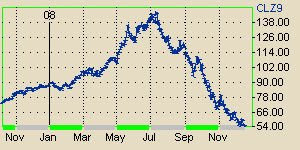 Don't be fooled by the quotes of oil trading in the $30s last week. The current quotes for just about all forward months is above $50. The chart above is for the Dec '09 contract and it's currently trading for above $55 on the NYMEX. The supposed culprit for the current low prices is that the Cushing terminal is flooded with oil, therefore, requiring all excess oil to be dumped on the markets. Long term though the OPEC cuts and expectation that demand will eventually rebound has future months considerably higher. These higher future prices will undoubtedly help justify some of the long term projects being considered in the oil markets. Too much focus on last months prices missed the reality of the long term prices.
Post a Comment
Read more

Asset versus Market Value at SHLD

By Mark Holder - December 15, 2008
Commentary from Change Alley on the ridiculous market value placed on Sears Holdings stock (SHLD). Basically repeats some of what I've posted here before, but probably more eloquently. My favorite comment plus a great quote from Benjamin Graham: However, the large short interest in Sears strikes me as attempting to pick up nickels in front of a bulldozer; the real estate value is a massive imbalance that is incredibly clear-cut, paired with an aggressive stock buyback plan. The true investor scarcely ever is forced to sell his shares, and at all other times he is free to disregard the current price quotation. He need pay attention to it and act upon it only to the extent that it suits his book, and no more. Thus the investor who permits himself to be stampeded or unduly worried by unjustified market declines in his holdings is perversely transforming his basic advantage into a basic disadvantage. That man would be better off if his stocks had no market quotation at all, for he wo
Post a Comment
Read more

By Mark Holder - December 04, 2008
More signs of the times. NY Post has a report on Blackstone head Schwarzman being eager to make buyouts in this economy, but having trouble raising the cash. In normal times, he'd easily raise the money, but funny how during a weak market people are least willing to invest with him. Seems odd because his company is probably best served for profiting from the current environment. As usual people buy at the top and sell at the bottom. At some point in the near future, you'll see companies like Blackstone go on buying sprees. Low interest rates would usually allow for huge deals to take place, but the frozen credit markets are preventing the normal business process to take place. When that happens, watch out. We'll likely see 12 months of unprecedented buyouts.
Post a Comment
Read more

By Mark Holder - December 01, 2008
According to this Reuters report, NBER has declared the recession is already 12 months old and within stricking distance of the longest post Great Depression recession on record. This isn't that surprising to anybody following the market. Though the surprising part is that the recession officially started in December of last year even though we had good, positive GDP growth in the first half of 2008. Alot on Wall Stree feared that the recession didn't start until the summer and would need as much as 18 more months to run its course. Now we likely are looking closer to the end then the beginning. Whats interesting though is that NBER has a history of calling recessions when they are just about to end. The last recession in 2001 was called exactly the month that they later declared as the end. Does their declaration put and end to the rampant speculation of the recession and force people to finally start thinking about the end? History definitely shows that the call a recession
Post a Comment
Read more
More posts