By Mark Holder - October 05, 2010
Most people won't be surprised to learn that Mexico is leading the world in drug/gang related deaths over the last few years. Some 28,000 people have been killed since 2006 and 11 majors have been executed just this year. What would surprise everybody including myself is the Mexico stock market has lead the world recovery since its peak in 2007/2008 from the financial crisis. In fact, as of yesterday, Mexico was the only stock market to recover its complete losses and post a new high. This while the US stock market is down some 27% from its all time high at the peak in October 2007. More proof that US investors remain too focused on the domestic market and oblivious to the opportunities around the world.

Its also another sign that all assets have a price at which they become attractive. Doesn't matter if tourists might not feel safe in the country anymore, as long as the country is capable of producing more goods. Also with the increase of power in Asia and rise in transportation expenses, its pushed a lot of US multi national firms to look towards closer production sources such as Mexico. So while the US continues to struggle, our neighbors to the North (Canada) and the South are prospering off the US for very different reasons. NAFTA might have been the catalyst, but with or without it more jobs would've moved to Mexico regardless.

What's interesting is the pricing being given to Mexican stocks over the US and even Brazil. Not sure about the credibility of the numbers, but Bloomberg is reporting that the IPC now trades at a higher multiple. Its also interesting to note that Mexico can now get lower bond rates then the State of Illinois. Truly amazing how bad the finances of the governments in the US have become. Heck, Mexico is paying 1.7% less then California. Wow! Has Mexico really gotten that much better?

Unfortunately Mexico doesn't provide for a lot of investment opportunities in the US. Homex (HXM) has been a favorite stock selection in the past. HXM is a leading homebuilder in Mexico where housing is in a huge shortage. The stock has run 33% over the last couple of months so stepping in now might not be a good idea. Stock only trades at 10-11x 2011 estimates so it isn't overly expensive.

via Bloomberg:
Chart from Bespoke showing global market returns since the financial crisis peak in 2007/2008: (Note that China has driven the global rebound, but is still down some 50%. Watch for them to rebound) 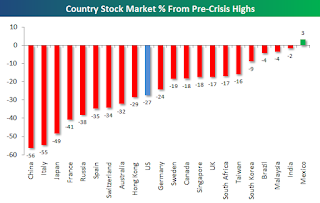 Unknown said…
Financial Analyst jobs only for you! Search through thousands of Accounting jobs in India. Finding different type of ads in india.
October 6, 2010 at 1:28 AM

Web Express Zone said…
Buy or Sell Vehicles
Buying or Selling used or new vehicles have become lot more easier after this online classified portal concepts in India and IZY DAISY proves to be one of the best platform to post Free Classifieds In India. https://www.izydaisy.com/