By Mark Holder - October 06, 2010
Brean Murray upgraded one of our favorite coal stocks in Massey Energy (MEE) today helping lead to a 6% jump in the shares. MEE has been a stock that we've loaded up in the sub $30 range for a few months now. The stock was completely oversold following the accident at the Upper Big Branch back in early April. Investors buying now missed out on a steal in a early July and late August but the run is likely just getting started.

See article from July 14th: Buy the Other Disaster Stock

According to Brean Murray:

Sussman wrote that "the regulatory pressures are largely priced into the stock, so that the risk-reward balance is now favoring investors who own the stock." In addition, Massey should benefit from its leading position in producing Central Appalachian coal. Its value for each ton of reserves is around $1.40, compared with an average of $1.90 for similar companies, he wrote.

Stock is in the process from breaking out.  Needs to clear $34 but it has already broken above the 200ema making further upside very likely. 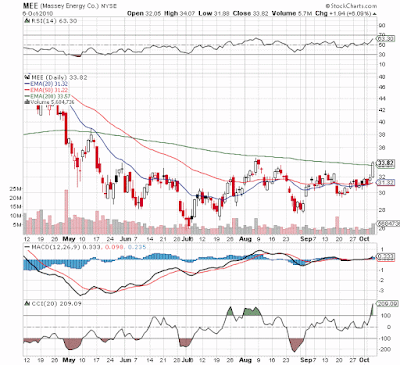