By Mark Holder - October 01, 2010
Bought MF Global (MF) in the Opportunistic and Growth portfolios to rotate into a financial that underperformed over the last month or so. MF is particularly interesting because they hired former Goldman Sachs (GS) Chairman and ex-Governor of New Jersey to be their CEO. He has taken an aggressively path to move into investment banking plus they reported a strong margin expansion in Q2 due to cost cuts. Q3 will be as impressive due to the slow market, but now is likely the time to build a position.

This is mainly a move that Corzine will be able to use his experience and influence to make MF into a major financial player. Especially at a time when the major players like Goldman Sachs (GS) and Morgan Stanley (MS) continue to face massive regulation pressures. Whether MF will be able to overcome such pressures isn't clear, but if anybody is going to make it happen its a Democrat like Corzine.

The position was entered around $7.2 and is definitely being entered based on technicals. The stock is poised to breakout of this tight trading range whether up or down. More complete writeup to follow next week. 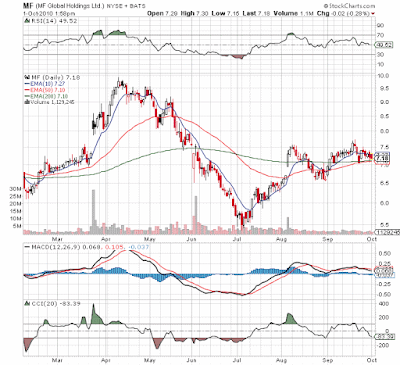