Showing posts from November, 2017
Show all

By Mark Holder - November 10, 2017
LendingClub plunged following disappointing Q4 guidance. Most of the impacts are short-term adjustments to the credit model or temporary market conditions. The fintech guided to record revenues for Q4 and expects further growth in 2018. LendingClub (LC) plunged 16% in the first day of trading following Q3 resultsafter taking a hit leading into earnings. Despite record revenues, the market was highly displeased with projections even considering a highly attractive valuation. Read the full article on Seeking Alpha.
Disclosure: Long LC. Please review the disclaimer page for more details. 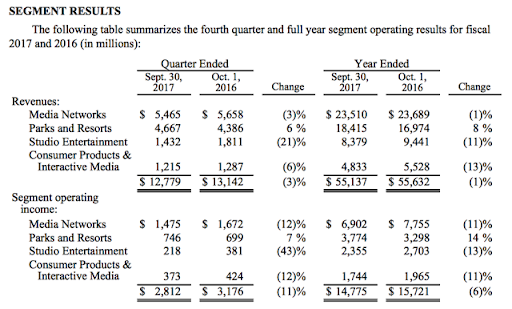 The FQ4 results for Disney (DIS) were predictably weak. The ongoing weakness in cable networks was hidden last year by the strength of movies and the media giant is now getting hit by weaknesses in both segments.

Incredibly though, the stock still trades near $100 and at levels that mostly exceed the price last year. Is now really the time to own Disney as the company embarks on a digital shift? Disney missed both top and bottom line analyst estimates in a sign of how bad the times are now. The media giant has missed revenue estimates for five consecutive quarters, but the company didn't previous miss EPS forecasts. Disney faces multiple issues that can't offset the positive momentum from their parks and resorts division.