Showing posts from July, 2019
Show all

AMD (AMD) is down fracationally as the market is disappointed by weak Q3 revenue guidance. The number is a big sequential and YoY jump so investors should expect the stock to survive any concerns about revenue weakness. Not to mention, the margin story continues to play out as expected with strong guidance for reaching 43% in the Q and above analyst estimates below 42%.  Q3 outlook estimates:  Total revenue of $1.75-1.85B (consensus: $1.94B)gross margin of 43% (consensus: 41.7%). The news about a Google Cloud deal is more important to the stock as a big data center server win means more revenue over the long term, than any concern about the revenue ramp in Q3.  More research: AMD: Latest Campaign Has Several Targets More commentary on WhoTrades
Disclosure: No position. Please review the disclaimer page for more details.
Post a Comment
Read more

The investment thesis on Twitter (TWTR) has long centered around the growth of DAUs. In Q2, the social media site saw the mDAUs jump to 139 million, up from 134 million in Q1. Since the turnaround started in Q1'16, this quarter saw the largest sequential increase in users not related to Q1. 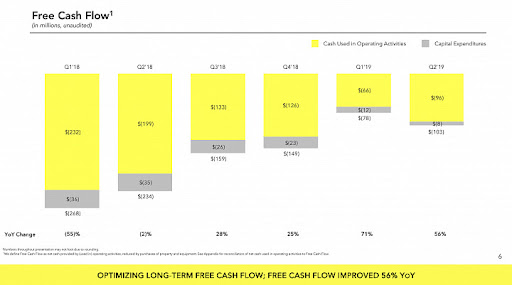 Are these numbers good? For Q2, Snap ($SNAP) reported numbers that beat analyst estimates, but the social messaging company still had a free cash flow loss of $103 million.
With the after-hours rally above $16, the stock now has a market cap of $25 billion and trades at about 12x 2020 revenues. Investors are getting too aggressive on Snap with the company still burning massive amounts of cash for a company with less than $400 million in quarterly revenue.  More research: Snap: Irrational Respect More commentary on WhoTrades.  Disclosure: No position. Please review the disclaimer page for more details.
Post a Comment
Read more

By Mark Holder - July 22, 2019
Government departments are lining up against the FTC case on Qualcomm. The only benefit of an FTC win on appeal is foreign smartphone competitors. Qualcomm remains on target to generate $7 to $8 in annual earnings per share. The stock has a logical path to reach a $100 target with risks that the wireless giant doesn't eventually win on appeal. Qualcomm (NASDAQ:QCOM) finds itself in an odd position of having different parts of the government fighting over how to handle an antitrust ruling against the wireless chip giant. The key thrust of why the wireless giant is likely to win on appeals is the threat to national security and the global nature of the wireless handset business in 2019. The bullish investment thesis remains right on track despite analysts heading to the sidelines on risk concerns. Read the full article on Seeking Alpha.  More commentary - Out Fox The $treet - July 22, 2019 Disclosure: Long QCOM, AAPL. Please review the disclaimer page for more details.
Post a Comment
Read more

By Mark Holder - July 17, 2019
Aurora Cannabis broke recent strong support above $7. The large cannabis player announced a new business model of growing cannabis at outdoor sites. The move combined with Canopy Growth news suggests the adjusted EBITDA positive target isn't maintainable. The stock appears poised to retest the $4s. With a couple of recent disasters in the Canadian cannabis sector, Aurora Cannabis (ACB) will likely return to the recent lows. The sentiment shift in the cannabis sector will impact all stocks and a subtle signal of a new business model is problematic. The investment thesis continues to tilt negative until a lot of the hype is stripped from the cannabis sector and the desire to add new production ends.
Read the full article on Seeking Alpha.  More commentary on WhoTrades Disclosure: No position. Please review the disclaimer page for more details.

Sprint, T-Mobile Merger Back On Hold

By Mark Holder - July 11, 2019
Seeking Alpha provided this snippet where the T-Mobile (TMUS)/Sprint (S) merger is on hold again.

T-Mobile (TMUS-1.9%) and Sprint (S-3.6%) are sliding off a new Wall Street Journal report that merger talks have slowed, over conditions around the involvement of Dish Network (DISH+0.5%) in the deal. Talks are ongoing, but the two wireless carriers are planning to extend their merger agreement beyond its July 29 deadline to buy more time, according to the report -- a second extension of a deal that has dragged out more than a year.
A big part of the merger holdup is the requirement of the DOJ for a 4th viable wireless carrier to exist. For this reason, my prediction has long held that the merger will get blocked. Dish doesn't appear ready to step-up to the plate without major handouts and T-Mobile doesn't want the merger, if the end result is to create a strong 4th competitor.

The prediction still remains that the merger gets blocked and Sprint dips to $3.

A prime example of investors getting too negative on a stock is e.l.f Beauty (ELF). The affordable cosmetics stock leading the selfie generation plunged from a high above $30 at the end of 2016 following a successful IPO to end up below $7 early this year. The market got far too negative when the market cap dipped to only $350 million.  The reliable P/S multiple kicked into full gear with e.l.f having a revenue target of $250 million. The stock has now doubled and JPMorgan turned bullish on the stock today.  Now probably isn't the time to chase the stock, but ELF provides a great example of investors leaving a big gain on the table with the double off the lows. When the P/S multiple has a 1x figure, any stock outside of a company at risk for bankruptcy gets appealing.
More commentary on WhoTrades
Disclosure: No position. Please read the disclaimer page for more details.

Nice rally for Twitter (TWTR) today has the stock breaking the recent downtrend. The stock clearly wants to test the $40 highs again.

By Mark Holder - July 09, 2019
Acreage Holdings is down substantially despite the future merger right from Canopy Growth. The corporate upheaval at Canopy Growth places the merger at risk and raises the prospects of failed math used to consume the deal. Avoid the stock until Canopy Growth gets on stronger financial footing. The Canopy Growth (CGC) firing of the founding CEO and the related market ramifications aren't going to help Acreage Holdings (OTCQX:ACRGF) shareholders. The original merger was heralded as a big premium for Acreage shareholders, but the stock hasn't fared well and the risk is to the downside unless the merger dissolves. Read the full article at Seeking Alpha.
Disclosure: No position mentioned. Please review the disclaimer page for more details.

LendingClub: Not All Reverse Splits Are Bad

By Mark Holder - July 05, 2019
LendingClub announced the reverse split will be effective when the stock opens for trading on July 8. Historically, reverse splits are bad for shareholders with stocks underperforming the market by a wide margin. The stock remains perplexingly cheap at an EV/S multiple of 1x and EV/EBITA of 6.5x. Use any reverse split-related weakness to own LendingClub. For multiple reasons, reverse splits don't typically work out well for shareholders. The news that LendingClub (LC) is pursuing a 1-for-5 reverse split followed a 10% gain during the trading day. Investors shouldn't necessarily stray away from the fintech on this news due to the perplexing value in the stock.
Read the full article on Seeking Alpha.  More commentary on WhoTrades Disclosure: Long LC. Please review the disclaimer page for more details.

By Mark Holder - July 03, 2019
Canopy Growth continues to prep for markets that aren't ready for its cannabis products. The company forecasts current quarter harvests of 34,000 kg will nearly quadruple the December quarter levels while demand has soured. Canopy Growth reported a massive C$97 million adjusted EBITDA loss that shocked the market. Money-losing stocks aren't likely to maintain a rich EV/S multiple of 11x FY21 revenue estimates (numbers analysts are likely to cut). On the path to inevitable success, Canopy Growth (CGC) continues to hit bumps in the road. The stock fell 8% following the release of outdated March quarterly results, in another sign that the leading cannabis company and the sector just aren't ready for prime time yet. My bearish investment case remains intact. Read the full article on Seeking Alpha.  July 3 Update CEO Bruce Linton was fired and the stock is no trading solidly below $40.  Check out WhoTrades for timely updates on the subject.
Disclosure: No position mentioned. Pl…
Post a Comment
Read more

By Mark Holder - July 01, 2019
Under Armour continues to make progress in innovating new products that will return the company to the premium market. The company remains on path to boost gross margins to 48%. The stock is in an uptrend with the initial target to overtake the P/S valuation multiple of Nike with a long-term target of Lululemon at over 5x sales estimates. Some hints at new product innovation should have investors taking another look at Under Armour (UA, UAA). A lot of investors want a money maker now, but the value in the stock is based on the future opportunity in the premium global athletic apparel and footwear sector. The stock is looking solid with strong resistance broken at $24. Read the full article at Seeking Alpha.  More commentary on WhoTrades Disclosure: Long UA. Please see the disclaimer page for more details.
Post a Comment
Read more
More posts