By Mark Holder - October 14, 2010
The China stock markets have been on a major 6 day winning streak taking the Shanghai Index from 2,600 to nearly 2,900. Though the below chart doesn't capture the roughly 0.6% move overnight, this index has been on a major rally. Its likely to end soon as the RSI and CCI numbers already show overheating without the lastest results included.

For the short term, the market could easily see a small correction but longer term this index is likely going back up to at least 3,100 which is where it was at back in April. The China domestic plays like LIWA and PUDA remain the best plays as they still haven't rallied much especially compared to their very strong fundamentals. US stocks that benefit from a stronger China have mostly rallied very strong such as FCX hitting 100 today. Met coal plays such as ANR and MEE haven't run as much so they might provide the best upside from a domestic play. Or possibly a company like TEX might provide the best upside as crane sales have remained weak and if China perks back up that might drive demand in that sector. 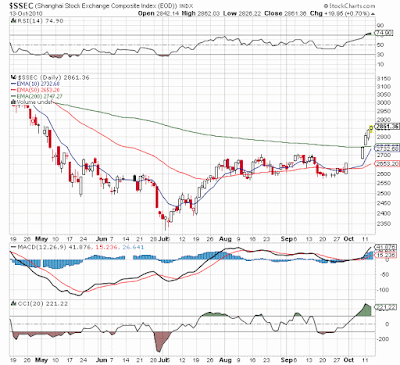