Kohl's activists want the company to sale-leaseback up to $4 billion worth of real estate. In theory, the company could boost EPS substantially by repurchasing shares, but actual net income would fall. The stock is cheap at only 7.5x FY22 EPS targets while trading with a market valuation equal to real estate holdings. This idea was discussed in more depth with members of my private investing community, Out Fox The Street.  Learn More » Activists continue to circle at the gate due to  Kohl's  ( KSS ) being an extremely cheap stock. The company has very valuable real estate on top of a strong earnings stream which is why a group of activists are lining up to bid on the retailer. My  investment thesis  remains very Bullish on the stock trading at 7x FY23 EPS targets. Read the full article on Seeking Alpha.  Disclosure: Long KSS. Please review the disclaimer page for more details.  Update - Jan. 24 These offers for $KSS are worthless. Even $70 to $80 is far too low. -Kohl's
Post a Comment
Read more

DocuSign shocked the market back in December with a major warning for FQ4'22. The stock collapse has the CEO loading up on shares while ARK Invest has aggressively sold their much larger position. The company is back on a trend towards sustainable 25% growth making the stock valuation more appealing here at 10x forward sales. Looking for more investing ideas like this one? Get them exclusively at Out Fox The Street.  Learn More » While most of the high flying tech stocks have collapsed due to sales trends decelerating,  DocuSign  ( DOCU ) actually plunged on a massive guide down. The end result has been the CEO loading up on shares for the long term and an influential ETF dumping shares. My  investment thesis  is now Neutral on the stock until sales trends normalize. Read the full article on Seeking Alpha.  Disclosure: No position mentioned. Please review the disclaimer page for more details.   Update - Jan. 24 Possibly not the lows in $DOCU yet, but this was the prescribed weak
Post a Comment
Read more

By Mark Holder - January 12, 2022
Tilray reported another quarter of highly disappointing results, yet the stock again rallied initially on the numbers. The Canadian cannabis company missed analyst revenue targets by ~10%. The stock remains far too expensive at over 12x key cannabis and beverage revenues. Looking for a portfolio of ideas like this one? Members of Out Fox The Street get exclusive access to our model portfolio.  Learn More » Tilray  ( TLRY ) jumped on FQ2'22 results that somehow impressed the market. The cannabis L.P. actually reported declining cannabis revenues and a meager EBITDA profit after ignoring certain costs that are starting to recur. My  investment thesis  remains negative on the Canadian cannabis stock, as the company fails to grow cannabis revenues. Read the full article on Seeking Alpha.  Disclosure: No position mentioned. Please review the disclaimer page for more details.
Post a Comment
Read more

Zynga agrees to be bought by Take-Two Interactive at a disappointing valuation despite the deal premium. The new entity proposes a company rivaling EA trading at a major discount to the gaming giant. The new Take-Two will have appealing 14% growth rates plus $500 million in net bookings synergies in mobile. The stock will trade at a FY23 EV/S multiple of 3.5x, which is a major discount to past multiples. This idea was discussed in more depth with members of my private investing community, Out Fox The Street.  Learn More » For long-term shareholders, the  Take-Two Interactive Software  ( TTWO ) deal to acquire  Zynga  ( ZNGA ) for $10 per share is a disappointing valuation considering the stock regularly traded above $11 last year. For short-term traders, the 64% premium provides a good time to exit the stock after a rough last few months. My  investment thesis  remains Bullish on the stock after the massive hit to Take-Two Interactive takes Zynga down as well. Read the full article
Post a Comment
Read more

SoFi: Back To Where It Started

SoFi is cheap with the stock trading a the de-SPAC lows. The fintech continues to make great progress towards approval on the bank charter that will save up to 200 basis points on loan costs and improve revenues. The stock is too cheap trading at ~10x original '24 adjusted EBITDA targets. Looking for more investing ideas like this one? Get them exclusively at Out Fox The Street. Learn More » Despite a very promising start,  SoFi Technologies  ( SOFI ) now trades back to where the stock traded at the time of the de-SPAC transaction last May. The fintech super app was a buy the last couple of times the stock fell below $15 and nothing has changed now.  My  investment thesis  remains Bullish on SoFi  now down at $13 following a nearly 50% dip after multiple trips above $24. Read the full article on Seeking Alpha.  Disclosure: No position mentioned. Please review the disclaimer page for more details.  Update - Jan. 18 The stock is now cratering to new lows. The market is now startin
Post a Comment
Read more

By Mark Holder - December 28, 2021
Blade reported FQ4'21 revenues topped 2019 levels by 28%. The urban air mobility company is poised to expand routes in the next few years to accelerate growth. The stock only trades at ~2x FY23 sales targets while the business is poised to soar starting in FY24 due to EVAs. Looking for more investing ideas like this one? Get them exclusively at Out Fox The Street.  Learn More » Blade Air Mobility  ( BLDE ) remains the prime way to play an operating urban air mobility business. The company has an asset-light model allowing for a pristine balance sheet to quickly expand services over the next couple of years. My  investment thesis  remains Bullish on the stock below $10. Read the full article on Seeking Alpha.  Disclosure: No position mentioned. Please review the disclaimer page for more details.
Post a Comment
Read more 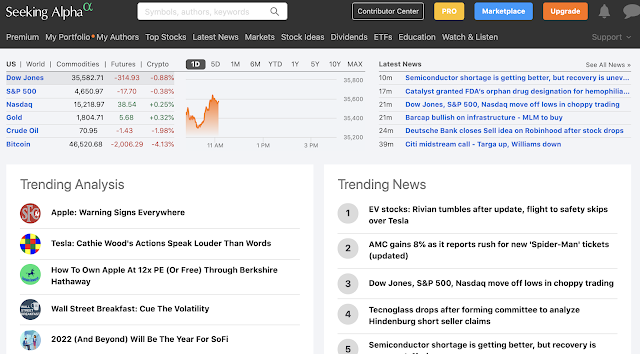 Apple continues to race towards $200 as multiple analysts hike price targets despite limited boosts to projected growth over the next couple of years. The average price target on Apple actually remains below the current stock price. The narrowing market breadth due in large part to Apple will lead to a larger market dip. The stock shouldn't trade at 35x forward EPS estimates despite all of the recent analyst projections. Looking for a helping hand in the market? Members of Out Fox The Street get exclusive ideas and guidance to navigate any climate.  Learn More » Day after day, analysts attempt to one up each other with higher price targets for  Apple  ( AAPL ). The tech giant already trades at all-time highs with a near peak forward P/E multiple despite the desire by analysts to suddenly hike price targets. My  investment thesis  remains Bearish on the stock at all-time highs while growth rates are set to cool. Read the full article on Seeking Alpha.  Disclosure: No position men
Post a Comment
Read more
More posts