Despite the weakness today, Yelp (YELP) is still above the lows following the disastrous Q3 report. The stock is down to $34 following a downgrade to Underweight from Morgan Stanley. The analyst sees issues with paying accounts, but the consumer review site already took steps to rectify the issue in the last quarter.

The key metric to watch in the Q4 report is the paying advertiser accounts. Earlier this year, the company shifted to no-contract accounts that saw big jumps in Q1 and Q2 followed by weak Q3 numbers. The paying accounts were still up 25% to 194K. 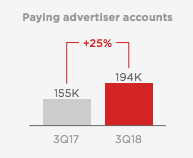 One should expect Yelp to grow ad accounts in Q4. In addition, the company ended the last quarter with $837 million in cash. The market cap is now about $3.0 billion placing the EV close to $2.2 billion.

The stock is a major Buy with revenue targets above $1 billion in 2019. This dip is another easy buy.