By Mark Holder - September 20, 2010
Looking at a chart of Freeport-McMoRan (FCX) and Copper (HGA) it would appear that Goldman Sachs (GS) is a little late to the party. Not that Stone Fox isn't appreciative that GS is pushing up one of our bigger investments. The stock trades at $83 now, but was available for only $57 when July started. Where was GS then? Not to mention that the new target of $94 doesn't provide that much upside from these levels so trade on this news with caution. 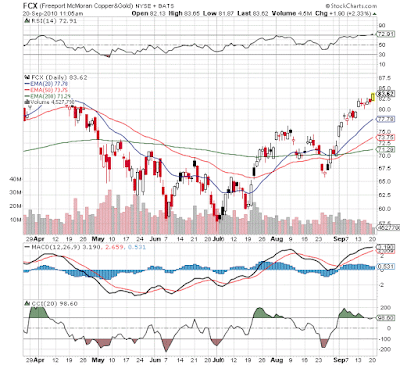 Copper has also seen a huge rise and is now attempting to breakout and test the recovery highs around $3.60/lb. So again GS seems to have turned bullish long after a run has begun. Now to be fair, the copper inventory situation has become a lot more bullish over the last couple of months. LME copper inventories continue to plunge on a daily basis from 520k tonnes 6 months ago to 382K tonnes today. 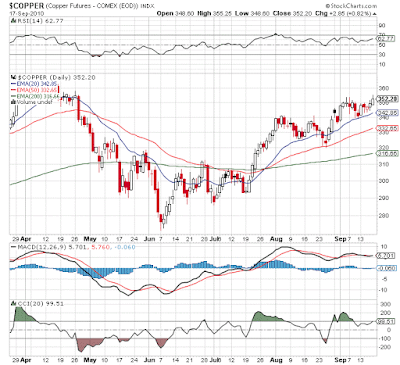 GS comments:
In other news, FCX made a $500M investment in McMoRan Exploration (MMR) to help them buy assets from Plains Exploration & Production (PXP) and invest in exploration and drilling in shallow waters off the US Gulf of Mexico. While MMR in its own right is an interesting investment, the ties between FCX and MMR have us questioning the arms length of this transaction. Something to keep any eye on as FCX should be investing in its own business rather then helping out its little brother.