By Mark Holder - September 27, 2010
Regions Financial (RF) hasn't had a huge reaction to such speculation because it's been a common myth so far that the regional banks would be buyout targets. So far nothing has happened in this sector so the market has been lulled to sleep. Likely on the new financial regulation in the US not to mention Basel III has limited the desire of banks to go on acquisition sprees. This might change in the near future so the speculation by Credit Sussie is likely logical.

After all the Canadian Banks such as Toronto Dominion (TD) and Bank of Montreal (BMO) are relatively strong and would likely relish the opportunity to buy an American bank on the cheap. The price is likely a sticking point. Canadian Banks aren't likely to pay up and regional banks such as RF won't part with shares on the cheap. RF currently trades anywhere from 20-50% below book value depending on what number you use. Are Canadian Banks willing to pay a multiple of BV?

The analyst mentions the option of merging with BB&T (BBT) to avoid a buyout, but that doesn't make much sense to us. BBT has a $17B market cap and would greatly increase the size of RF and reduce the attractiveness. Ultimately it would depend on how the deal was structured, but just merging with BBT would be non-sense.

While we don't expect anything to happen in this sector for now, we would surely welcome a competitive offer. RF offers a great opportunity to enter into the SE region. At these levels, the network would have to be cheaper to buy then to build. Not to mention, snapping up RF reduces competition in the process.

RF remains a solid position in the Growth and Opportunistic portfolios. Stone Fox has been exploring more investments in this sector, but so far the buyout premium seems likely the main reason to invest and so far that isn't a valid option.

Technically RF is flat lining with a break either way likely signaling the future. 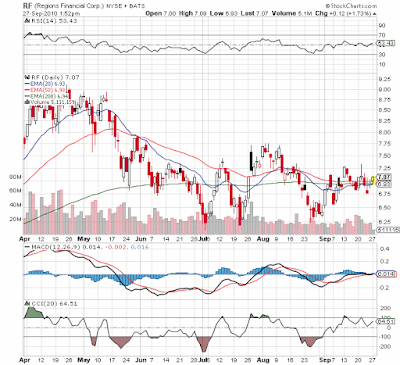