Agents Take Hartford Financial Out of the Penalty Box

By Mark Holder - September 21, 2010
At least that's the reasoning for an upgrade by Barclays of Hartford Financial (HIG) to a price target of $32. The stock current trades in the $23s and has a book value over $40 so that's not a huge stretch. Actually anything in the low $30s seems absurdly cheap.

Interesting news though to see that big agents that sell life insurance policies are restarting business with HIG. Not sure what took so long as HIG has been financially solid for a while now.

Info from Barclays:
Investment Conclusion
We are upgrading The Hartford to a 1-Overweight from a 2-Equal Weight and are increasing our price target by a dollar, to $32 from $31. There are two reasons for the upgrade. First, a survey of top-producing life insurance salespeople around the U.S. conducted in recent weeks by Barclays Capital Life Insurance Research -- a survey of agents who would be best positioned to write big policies for The Hartford -- found renewed interest by these agents in doing business with The Hartford. This is after several quarters in which The Hartford's weakened financial state led them to steer clear of the company. Second, recent conversations we've had with The Hartford's management have led us to conclude that the company did, indeed, learn lessons from the financial crisis about the importance of hedging risk. These conversations have led us to conclude that Chris Swift, The Hartford's new CFO, will likely be aggressive about purchasing new
financial hedges (if he hasn't done so already) for the company.

Our call today: The Hartford is serious about managing its risk and indeed may already have moved aggressively to further manage its exposure both to equities and to the Japanese yen. This was the main inference we drew from a recent 30-minute conversation we had with Mr. Swift, the company’s new CFO. Separately, the canvassing we did in the form of an informal survey of top life insurance agents around the U.S. revealed a renewed sense of openness, i.e. a renewed willingness on the part of agents to do business with The Hartford. Simply put, while our survey uncovered agents who continued to express reservations about The Hartford, and in some cases agents we interviewed said they remained unwilling to do business with the company, an even larger number of agents we interviewed told us they were warming up again to The Hartford after several quarters of having it in the “penalty box.”

HIG remains one of the top positions in all of our portfolios. Currently trading at a substantial discount to book value in a much more stable environment makes them too cheap to pass up. Chart has turned much more bullish recently as well. 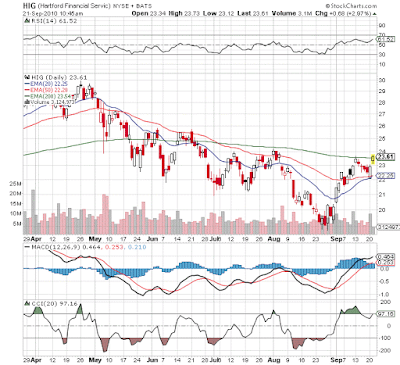