By Mark Holder - September 17, 2010
As we've reported in the past, Junk bond funds such as the Lehman High Yield Bond ETF (JNK) continues to rally higher as the stock market pauses at the June and August highs. Sure its people desperate for higher yields then the absurdly low Treasuries and even high grade corporates. The reality though is that it signals too many people placing emphasis on the direction of the stock market has how it relates to the economy. Investors wouldn't rush into JNK unless they were confident of a stable economy. Weakness in the stock market has much more to do with structural changes away from stock investing.

This is just another signal that any pause at the 1130 range in the SP500 will likely be short lived. An assault on the April highs of 1220 is likely around the corner towards year end. 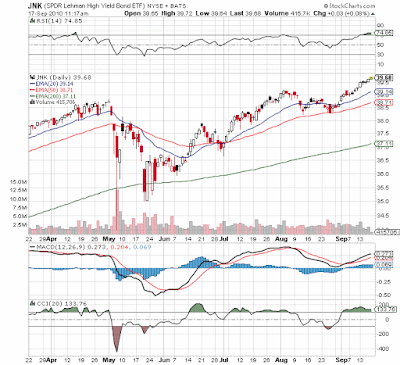