By Mark Holder - March 08, 2010
Dicks Sporting Goods (DKS) reports before the market opens tomorrow on the 9th. In general, analysts expect them to easily surpass earnings as the cold weather drove high sales in the higher margin outerwear category. My main concern is that analysts seem completely fixated on the outerwear business that clearly benefits from snow and cold weather, but what about the golf division. The unusual snow in Texas and cold weather in Florida would have an impact on the golf division.

Regardless, we're very bullish on DKS long term. They trade at 19x the $1.32 estimate for this year. Not overly cheap but assuming they beat estimates and as the focus moves toward the 2011 (Jan 2012) estimates I'd expect a much higher stock price. Just don't expect a big ramp on beating estimates tomorrow.

Technically the chart is interesting as DKS pushes towards a triple top. Obviously a break above the $26 level because very bullish. Of course a breakdown from this level especially one taking the stock below the 20.50ema becomes very bearish. Its in a make or break situation. 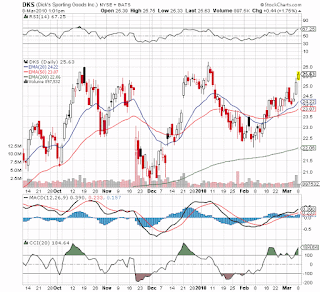