By Mark Holder - March 01, 2010
Riverbed Tech (RVBD) is the largest holding in our Growth Fund and the new Covestor Model. Today the Networking and Communications Industry which focuses on RVBD and F5 Networks (FFIV) is up big for an unknown reason (at least so far). Both stocks are soaring past 52 week highs.

It helps to now be rolling into 2011 estimates of $1.07+ making the PE much more reasonable.

The move could also be a technical response. RVBD just broke out of a nearly 7 month consolidation pattern where roughly $25 had served as a triple top resistance. Breaking that mid-February has likely drawn in a ton of technical investors. 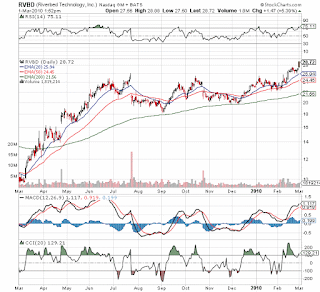