By Mark Holder - December 29, 2011
After an amazing decade run, Gold (GLD) has finally run out of steam. Nobody seems to know why gold would collapse now if Europe still a disaster area. Probably more that the trade became too crowded.

Never was a fan of owning the physical commodity, but clearly it was a profitable trade. Anybody still owning gold should be careful as the GLD has broken solidly below the 200ema. No reason for Gold to remain in the $1,500 level. 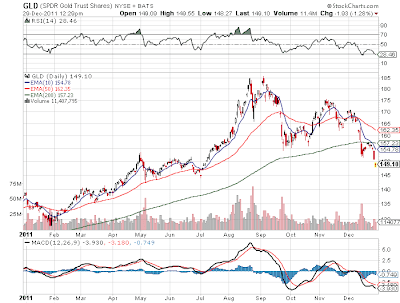 Update: Interesting post from Seeking Alpha. Note the huge difference in performance for Gold versus the Dow would make me concerned about owning last decades winner and this decades loser.

12:38 PM A nice late-year run by stocks combined with the fall in gold prices has allowed the DJIA (with dividends included) to pull aheadof the yellow metal's performance for 2011 - a massive turnaround from late summer, when gold was in the lead by 26%. Goldbugs retain a big advantage over the last decade though, +465% vs. a 54% total return for the Dow

Unknown said…
I am surprised that gold run out of steam because I think its a nice investment of wealth. I buy gold coins online because I treasure it more than silver. Nowadays I see people owning silver accessories, furnitures, etc.
March 9, 2012 at 4:57 AM

buy gold online said…
How did this happen? Gold's value have run out of steam? That's quite impossible. I hope that the value will rise in a few months. I have a gold investment and it's scary to see these figures.
March 12, 2012 at 10:02 PM

Erica White said…
It's an unpleasant news to my Long Island gold buyers friends. They've acquired too much gold since 2007 hoping the price rise would skyrocket. I hope this year would be better or perhaps they have to wait for 2 or 3 more years.
April 26, 2012 at 12:36 AM

Mark Holder said…
Gold had a long run, but its now at the point that it might break down. The financial crisis is all but over. Anybody owning gold now needs to be a where that it is setup for a potential nosedive.
April 26, 2012 at 10:15 AM

Stew said…
I guess it's high time to invest in the silver trade nowadays then, huh? The value of silver is more profitable than gold and the merchandisers of sterling silver jewelry are fairing better in the markets as well.
June 1, 2012 at 2:56 PM