The Death of Sears Holdings Is Awfully Premature

By Mark Holder - December 27, 2011
Today Sears Holdings (SHLD) provided a Q4 update that was very disappointing to the markets. Exactly why it was that disappointing or surprising goes to show how few investors exist these days. Too many traders jump on the headlines as perceived grossly negative and begin pounding the stock down.

At the end of the day, the stock was down an amazing 27%. What was so devastating about today's news that sunk the stock? Well, honestly we're still not that sure. Comp sales are down 5% QTD and EBITDA will be roughly half of last year. Anybody paying attention should've known the numbers wouldn't be that great.

The other news was that up to 120 stores would be closed. While sounding negative, that has been the plan at SHLD for a very long time. The weak stores are closed so that the inventory can be turned into cash and the stores can be sold or leased.

The biggest question one has to answer is why do investors even care that much about retail sales. Isn't the stock more about monetizing the brands outside the Sears walls and turning the company into a REIT?

My article back in September highlighted the potential of monetizing the main brands and compared them to their counterpart public brands. At that time, the brands allowed to expand outside of SHLD stores would have a comparative value around $19B. See estimates below:


This didn't even focus on the REIT aspect. SHLD has nearly 250M square feet in over 3,700 locations. This real estate has huge potential as SHLD works through the model of leasing space. See article here.

Ultimately all the potential just doesn't matter as investors focus on the headlines and the retail stores. The stock is now at the March 2009 lows. Incredible that any stock has revisited those lows, but that is currently the fate of SHLD. When the stock finishes shaking out it will provide an incredible value. Remember that when push comes to shove, SHLD could always sale and sublease some of the stores providing a huge cash infusion. 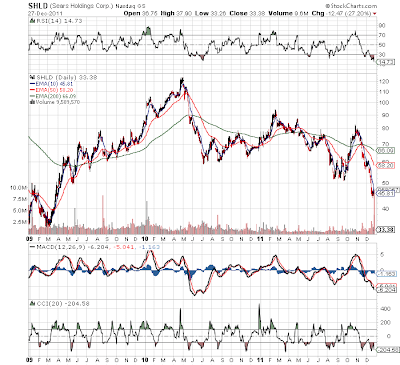 Details from the PR:

Mark Holder said…
Great comment from an analyst in a Bloomberg article that just got pushed out:

“If they can just create enough cash flow to get through the downturn, at some point there is going to be a huge uptick in appliance sales,” Paul Swinand, an analyst with Morningstar Inc. in Chicago, said in a telephone interview. “They just have to make sure that when that happens they are not cut off at the knees, and that it doesn’t all go to Home Depot and Best Buy.”