By Mark Holder - December 21, 2011
This morning Teva Pharma (TEVA) released their financial outlook for 2012. TEVA is the leading generic drug maker in the world and is based in Israel.

The numbers were generally in line with expectations and on a fundamental basis appear very appealing. Stock traded at $42 and the company guided to $5.58. Anybody doing simple math can probably conclude that a continue earning that much money and trading at only 7x estimates is cheap.

For our Net Payout Yields model though, the fundamental picture such as PE ratio and earnings growth just don't matter.

What matters is that TEVA announced a $3B stock buyback and the potential for dividend hikes. As compared to the $5B buyback announcement of Oracle (ORCL) yesterday, the TEVA deal amounts to 8% of the current outstanding stock with company having a $37B market cap.

Clearly the TEVA deal is much more attractive, but the key will be whether the money gets spent and how quickly considering the mention of a 3 year time period. The NPY model only invests in companies that follow through with purchases.

Teva also has a 1.6% dividend yield so that also doubles the meager 0.8% yield for Oracle. 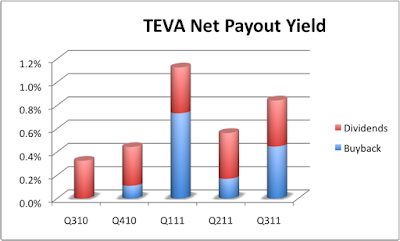