By Mark Holder - December 22, 2011
Jobless claims continue to drop towards the mid 300K level. A number generally consistent with solid jobs growth, but not near the lows of 300K in the mid 2000s.

Mark Perry has a great chart showing the jobless claims as a percentage of the civilian workforce. The jobless claims number provides the absolute number of how many looking for a job, but it does a poor job of relating the relative change of the number over time.

As the workforce increases over the decades, the absolute total of jobless claims will rise adjusting what should be considered normal claims levels. Unfortunately the market doesn't accurately grasp these changes. Most economics and analysts on tv still subscribe to the numbers from the '80s and '90s when the labor force was much smaller. 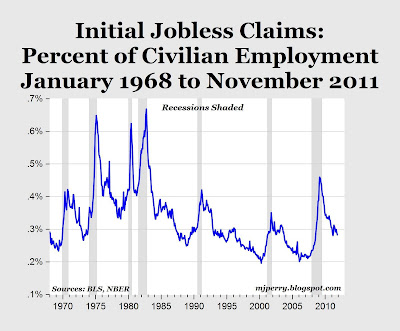 From the chart, it is much clearer that the unemployment situation is actually better than in the '70s and '80s. Only the lows in the '00s provided a sustained level of unemployment below the current levels.

This might help explain why consumer spending has held up better than expected considering consumer confidence. Confidence might come across low because consumers got use to the boom times in the late '90s and even the mid '00s from real estate. Historically though the jobs picture is much better than normal. Not many people seem to grasp that more than 90% of the population have jobs.

How many people really know that many that are unemployed?