By Mark Holder - December 30, 2011
Don't look now, but food inflation in India is now under control. Prices of primary food items rose only 0.4% in the week ended December 17 from a year ago.

Lower food inflation places less strain on the economy and lowers the overall inflation rate allowing the RBI to begin easing monetary policies. Rates were increased 13 times since March 2010 and has started having a major impact on growth.

Inflation is expected to drop to around 6% in the next few months and maybe lower if food prices are any indication.

As I wrote recently for Seeking Alpha, India stocks are ripe for buying as inflation comes under control. A lot of the fears were misplaced as the sharp drops in commodities from the credit crisis lead to artificially inflated price increases by the start of 2011. Now after some cooling of growth, inflation rates have dropped dramatically and as the world economy goes into 2012, prices for most commodities will show year over year declines.

The the deflation calls start rolling in! Who knew that onions were so crucial? 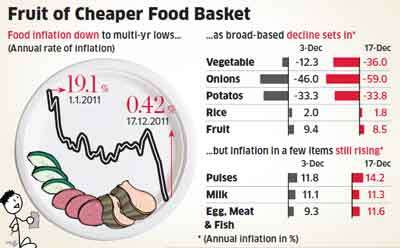