By Mark Holder - December 09, 2011
Anybody following this blog should know by now that C&J Energy Services (CJES) is one of our favorite stocks at Stone Fox Capital. As the stock dropped below $14 back in early October, we started thinking maybe our thesis was crazy.

Now with the stock attempting to break above $22, its nice to see that a respected mutual fund manager is behind the stock. Bob Auer of the Auer Growth Fund looks for stocks with a 25% increase in earnings, a 20% increase in revenue, and ones that trade below 12 times earnings.

His comments on CJES via CNBC report:

] is riding the oil-shale boom as a provider of a wide range of premium hydraulic fracturing services for oil-shale drillers.

The company has a market value of $1 billion and a forward P/E of 5.1.

Auer said the company has been in the business for at least 10 years and went public in June. "They have had eight consecutive quarters of year-over-year triple-digit sales and earnings growth."

"Yet the stock is at $21 and it is in the hottest thing going," he said of oil-shale production.


Nice chart below. Stock broke resistance at $22 on heavy volume and has the appearance of an inverse head & shoulders. 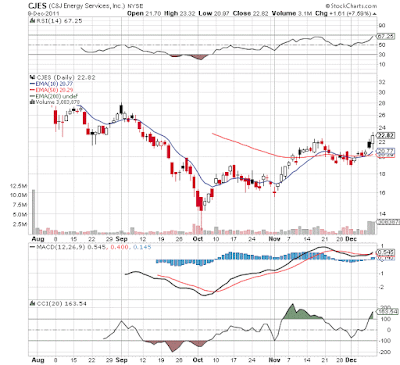