By Mark Holder - August 16, 2010
Its amazing how much impact analysts have these days. After the frauds in 2000 and the common thought on the street that the process is rigged, its amazing how many people still wildly follow the moves of analysts. Now with the widespread dissemination of information by the internet its even more preposterous that stocks swing wildly based on a upgrade or downgrade by sometimes randomly never heard of analysts.

The prime example the last week or so is Terremark Worldwide (TMRK). After earnings on the 4th, it appeared that TMRK was headed for a major breakout with strong growth forecasted and the every important cloud computing offering showing sizzling growth. Stock jumped to recent highs of $9.25 the next day. Then, out of the blue an analyst downgrades the stock and it swoons the following day. On Monday, Wells Fargo hits it again and before you can even read the first report the stock is down some 20% after a solid report. Whats amazing is that nothing earth shattering was highlighted by the analysts. In fact, the first downgrade was based on valuation alone with the target raised to $10. In a rational market, buyers should've stepped in when the stock sank back to the mid $8s. This isn't a rational market though as traders focus solely on the analyst move and not valuation letting the stock fall to the mid $7s.

Finally, this morning another random analyst upgrades the stock and boom its back up 6%. What did this guy unearth that made investors pile in today? Well, I'm still trying to figure that out. Guess we all just need some hand holding at times.


8/6 - RBC Downgrade:
Terremark had posted a smaller net loss for its fiscal first quarter, with revenue roughly in line with, and its net loss per share a penny below, Wall Street's expectations. RBC analyst Jonathan Atkin downgrade its stock to "sector perform" from "outperform" and increased his target price to $10 from $9.

"We see comparatively less upside to our (increased) $10 price target and prefer to wait until there is greater visibility on the company's ability to convert its impressive bookings pipeline into recurring cash flows," Atkin wrote in a note to investors. He said he would also prefer to wait to recommend buying the stock until it's clear that Terremark can achieve its increased guidance for fiscal 2011.


8/16 - Benchmark Upgrade:
The Benchmark Company is out with a research report this morning, where it upgrades shares of Terremark Worldwide Inc. (NASDAQ: TMRK) to Buy, from Hold; it has a $9.00 price target on the stock, up from $8.50.

The analysts also increased their estimates on the name. As for valuation, the analysts remarked, “Terremark is valued at 10x FY2011E and 8x FY2012E operating income before depreciation and amortization (OIBDA or EBITDA). Our $9 per share price target equates to 11x FY2011E and 9x FY2012E OIBDA, within Terremark’s recent trading range.”

Conclusion
Do your own research and don't follow analysts. After all, the more bullish guy is the one that downgraded the stock because he has a $10 target. TMRK was a clear buy once it sold off following that downgrade. It's still a good buy for anybody looking for a solid cloud computing stock. Just be careful who you follow. 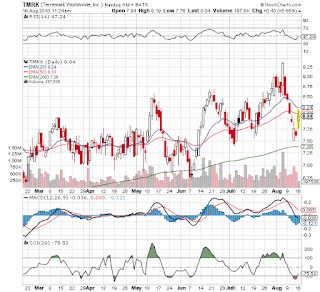