China Watch: China Up, US/Japan Down

By Mark Holder - August 15, 2010
It seems some of the developed markets still haven't figured out that China and the emerging markets rule the world now. The US was down Friday and Japan is weak tonight based on a weak Q2 GDP report. But does it matter when China was up nicely on Friday and is up another 1.3% today?

Anybody looking at the wrong markets is likely to underperform the remaining months of this year. The stock markets in China have turned around in a dramatic fashion yet the US market remains weak. We're heavily invested in China based plays such as local stocks like Puda Coal (PUDA) and Lihua International (LIWA). Both companies trade at lower PEs then the growth rate of China. How is that possible? You'd think a fast growing China stock would trade at 15, 20, or even 30x earnings. Well, you'd think so but I guess every small cap China play is a fraud, but any India company brought public by the large US investment banks is considered safe. See the MakeMyTrip.com (MMYT) IPO last week. Company is fast growing but isn't profitable and now trades in the mid $20s yet both PUDA and LIWA have earnings in the $1+ range and forecasted 2011 earnings closer to $2 yet they trade sub $10. Somebody explain to me how going public via the supposed corrupt Wall Street firms provides that sort of credibility. Anyway, thats another discussion.

As you can see from the chart below (where can I get a free chart that shows up to the minute data for China?), China is turning much more bullish especially when you add in the big gain today. 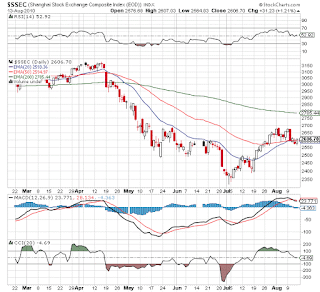 PUDA reports in the AM so be careful with that stock. They should have positive earnings but it will be interesting to see how the market handles the lack of coal mining revenues. They were expected to start in May but its still in the process of commencing. It should be built into the stock and only a minor delay in the very positive long term future. Still the markets tend to be inefficient in these small cap plays.

Edit 7:50am: Shanghai ended up 2.1% while Japan was down 0.8%. Considering the China is now the 2nd largest economy, I'm still puzzled why the US is following the Japanese market. Buy the dips.
China Watch Lihua International LIWA PUDA Puda Coal