Cash is King! If So, Why Don't Corporate Profits Rule the Market?

By Mark Holder - August 30, 2010
Everybody knows the mantra 'Cash is King!'. Companies and even individuals with cash can control their destiny. Well, at least a lot more then somebody burdened with a ton of debt. That's why the disconnect between huge corporate profits and the stock market is perplexing. Doesn't anybody realize that corporate profits leads to cash which should rule the markets?

Clearly they don't because based on 2000, its the expected future earnings that rule stock prices. Of course, that's always part of the equation. Considering history shows (see chart below) that corporate profits tend to continue upward on a regular basis except for some temporary dips during recessions. Once hitting bottom they tend not to dip any further until a new plateau is reached some years/decades later. 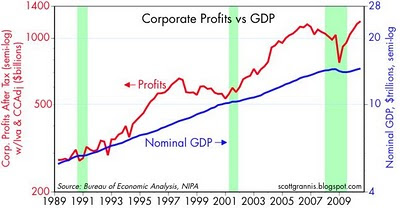 Even more amazing is that profits were falling back in the late '90s as the stock market was soaring. The potential for future profits drew everybody into the market yet they never materialized. Now in 2010, profits have nearly doubled in this decade yet the stock market has gone nowhere. Partly because of the excesses reached in 2000 that needed to be worked off and now partly because the general investing public seems so misguided on reality.

Guess the corporations should hire more people instead of making so much money. Investors should be happier with the higher earnings, but maybe it just all comes down to outflows of investments. More workers would mean more confidence, more 401K money, and more spending. Though as we showed in 2000 that doesn't mean more profits. Why do investors chase revenue instead of profits?

For now, we'll have to stick with the facts that higher profits are here to stay, but it doesn't necessarily mean higher stock prices. The companies are undoubtedly more valuable, but value and stock prices don't always match. So much for Modern Portfolio Theory! Unfortunately the markets are hanging onto a cliff. Any further weakness could lead to a massive sell off. Not likely though considering the overwhelming bearishness.

The one think that we know is once the market turns for good, its due for a material rally over the next decade. Corporate profits will continue growing and markets eventually return to mean. So it must catch up to its historical PE around 15. Won't be long before the SP500 earns $110 and even 120. Do the math and you can see that the current tug a war will seem irrelevant down the road. Earnings support significantly higher prices...eventually. Whether the market realizes it or not. Earnings turning into cash will rule!