The market has become increasingly technically driven making investment decisions based on fundamentals virtually worthless. Too many investors feel the fundamentals could collapse with a double dip just as they did in 2008. As I wrote in a previous entry [Coventry Health Ups Guidance - Stock Limps Higher], even a company showing fundamental improvements is ignored by the market. CVH trades at a 7 PE multiple which in normal environments would be 2-3x higher.

James Altucher published a piece in the Wall Street Journal highlighting 7 reasons why the SP500 could hit 1,500. Nearly a 40% gain from the current levels. He highlighted several reasons regarding the strength in corporate profits something that is historically important to stock prices. When the market stabilizes, profits will once again become important so its key to understand where the market could go based on current projections.


Corporate Profits at Record Highs:
After tax corporate profits hit a record high recently. Earnings per share weren't at record levels for various reasons such as share dilutions in the financial sector. Higher earnings but higher shares outstanding equals less per share. This also highlights the benefits have weak employment reports. Less employees equals higher margins and much higher profits. Worker productivity has been off the charts. So while the employment picture might be disappointing if your looking for the job, its a little ignorant for the market to get wrapped up in anything but the bottom line of corporations. After all, aren't we as investors wanting corporations to make more money? Has anybody recently called up the CEO of a stock they own and complained because they aren't hiring enough people? 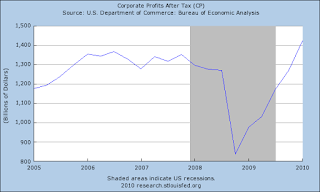 2011 SP500 Earnings at $94:
Estimates for 2011 are quickly approaching the pre-recession high of around $100. A double dip would naturally dent the earnings profile, but the market appears to be betting highly on the negatives only giving the market a forward PE of 11 versus the historical average around 15. Several industries should see higher per share profits while the financials will be impacted because of the significant share dilutions over the course of the last 2 years.

Again a lot of the recession fears linger from the lack of jobs, but the lack of hiring is because corporations are much more productive these days. Basically too good at making profits that investors don't trust the profits will continue. Another reason for profits growth, is that roughly half of SP500 profits come from locations outside the US. If a bunch of people in China get better jobs or raises, the US employment picture won't improve, but the one in China will and so will profits of US corporations.


Record Cash on the Balance Sheet:
Corporations now hoard nearly $1 Trillion of cash on their balance sheets. Partly helped by huge profits and partly a stat that should over time always continue growing larger. Its an amazing sign of how strong most balance sheets have become in the face of a recession. Profits snapped back much faster then the stock market. Foster Wheeler for example has nearly $1B of cash or nearly $8/share. The stock currently trades for only $23. This example could be repeated over and over. Dividends, stock buybacks, and cash buyouts will soar if the double dip fear ends. Google (GOOG) just paid $700M in cash for a private company. Don't forget that companies will keep adding to those coffers on a daily basis. GOOG makes enough money each quarter to pick up a $700M cash deal and still increase the cash hoard.

Even Private Equity funds have $500B to spend providing more fuel to any spending spree. Though I'll admit that its very perplexing that they haven't spent that money yet. Valuations just don't get much cheaper then now.


Earnings Yield
Cash is definitely King! Though apparently investors aren't so sure it isn't better to invest in Treasuries yielding a lot less then corporations with high cash flows. Remember CVH? That new guidance provides a earnings yield of 14%. FWLT has a Enterprise Yield of over 14% (strip out the cash) with earnings expectations of $2.1 this year. It almost seems lost that these companies are very profitable and will likely make a lot more money over the next decade. Investors seem utterly uninterested in the concept of being an owner and making all those profits. It just doesn't seem to matter, but some day it will.