The Surging Brand At Liz Claiborne

By Mark Holder - April 26, 2012
Quick name the retail brand that had the fastest growth rate in March? Bet not many people come up with kate spade. For March, kate had a 73% comp growth rate. Now don't officially quote the fastest part since I don't have access to any database of all brands around the world to confirm. Though seriously doubt that any major brand with over $50M in quarterly sales is growing that fast.

The growth rate of kate spade is what makes the debate about the value of Liz Claiborne (LIZ) such a heated conversation. Too many investors look at the total numbers for the company reported this morning and it doesn't really impress. Technically Liz reported no growth and basically flat EBITDA. Why would such a company be worth $2B as suggested by numerous articles speculating on buyout offers?

The answer is rather easy for anybody doing the research. Liz is a compilation of basically three brands. One that is surging, one that has turned around with good growth, and one that is still struggling. The total growth keys off which one of those brands is the largest.

What is the value of a brand with 38% comps and another with 21% comps?

Originally thought it would be worth comparing the size of Vera Bradley with kate spade, but Vera Bradley (VRA) has no where near the growth rate of kate spade. In reality, Lucky Brands is even growing faster than Vera and has similar revenue levels. Vera trades at nearly $1.1B while the whole Liz stock is worth $1.4B.

So does that mean that the second fastest growing brand at Liz has reasons to justify a valuation near $1B? Probably not as the current strong comps might just be a turnaround after some weak years. Will the growth continue?

Also, worth noting due to the massive conglomerate that was Liz Claiborne none of these concepts have had capital to fund expansion. Kate spade only grew square footage by 8% while Lucky was virtually flat.

With a lack of funding, this wouldn't be the ideal time to sell the company. Both kate and Lucky have a lot of growth ahead and Juicy has the potential to turnaround similar to what Lucky is now seeing.

While some investors don't see value at the current stock price, the recent numbers make it apparent that Liz is on the verge of turning the transformation into strong results. What is about to become Fifth & Pacific (FNP) could become one of the top retail stocks during 2012.

kate spade alone might be worth more than the current valuation and Lucky is increasing becoming a brand with some decent value as well. Selling out for $2B or $20 is starting to look like a dream for the buyers.

The stock price looks ready for another major breakout. See the chart below: 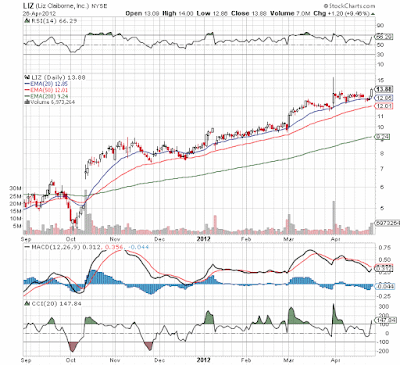