Impressive Numbers From Apple Yet Again

By Mark Holder - April 24, 2012
Oddly the bets on a negative Apple (AAPL) quarter were off the charts prior to the release. Every other person on the street suggested that the weak numbers from AT&T (T) and Verizon Wireless (VZ) were signs of impending doom for AAPL. The executives must get a chuckle out of all the non-sense that exists in the media.

AAPL reported earnings of $12.30 versus the estimate of $10.06. Yes you read that correctly. Though analysts were rampantly debating whether AAPL would miss estimates, the company actually beat numbers by over 20%.

Below are the highlights from Q112 earnings report:


Amazingly the company generated enough cash to buy Twitter for the estimated $10B price tag while leaving $4B left to add to the coffers. Not that I see Twitter as a good purchase for a product company, but rather just an interesting view on the cash flow generation ability at AAPL. At this point, any of the options the company has mentioned for it's cash won't even cover the cash coming in the doors. Much less the $110B on the books. AAPL must have a whole department bigger than most silicon valley startups working tracking on that cash.

As updated 2013 estimates file in, AAPL will be trading somewhere around 8x ex cash earnings. How does it not double from here? Though I do see a $1,000 price as a potential speed bump. AAPL needs to split the stock.

The below chart just makes one wonder what investors were thinking. 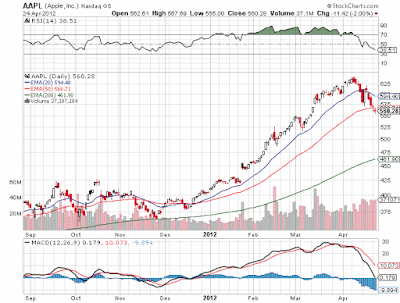