Stat of the Day: California House Listings at 3.5 Year Low 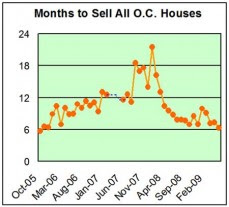 We've reported at numerous times over the last 6 months that the housing market in California is showing signs of bottoming. One of the biggest signs is in this OC Register report that housing listings have hit a level not seen since October 2005. The period when the slump began. From that level the inventory levels continued to soar until mid 2008 causing housing prices to decline. That trend has now completely reversed and the inventory levels are getting pretty low.

With interest rates low and housing affordability at highs, these inventory levels are consistent with higher prices going forward. Or at least stable prices that sure beat constant declines.