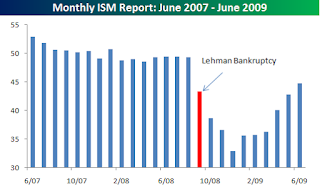 ISM Factory Index today reported a slightly better then expected number of 44.8 which was the highest number since August 2008. Though it still signals contraction, a number above 41.2 has historically coincided with a growing economy. This usually occurs because the US economy has for a long time been growing services and decreasing manufacturing. Not so sure that this report actually signals growth since the service economy may not be growing, but it does bode well that the number is getting much closer to even and signs exist that the car manufacturing will start to ramp back up likely pushing this number into positive territory in the next few months.


Edit 7/2: Added the graph. Gives a better picture how the economy has recovered from the Lehman collapse. Its shows how the market could easily rally to pre Lehman collapse levels around 1,200 and that a V shape recovery is more likely then most pundits suggest. Just about every economic graph shows a V shape so why would the sums not add up to such an event.
ISM Manufacturing