Chart of the Day: Inverted Head and Shoulders 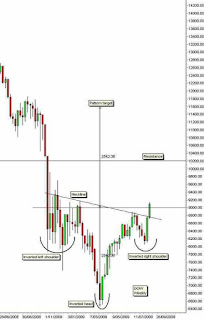 This fancy chart was picked up from CNBC showing what appears to be a huge run up to the 11,600 range on the DOW. It was just 2 weeks ago that people were calling for a H & S formation on the major averages to lead to this huge downfall. Instead we've gotten the reverse.

At Stone Fox Capital, we've become bigger users of technical analysis to guide trade decisions. The big Hedge Fund community uses charts for a big portion of their trades making it impossible to ignore. Typically we use them for verification of a trade we've decided to place based on fundamental analysis. Using the chart for entry/exit points has allowed us to make several profitable trades on stocks that we own and limited our downside exposure.

For the last few months we've been very bullish on the markets with the hopes of a V shaped recovery. Too many of the analysts and economists proclaiming that such a recovery isn't possible still don't grasp the impacts of a market that will make that decision for them. Whether or not such a recovery would happen based on the current economic news is baseless. It all depends on what the market and government does in the meantime. A market that rallies to 11, 600 as the chart suggests will inevitably create a V shaped recovery. Our only fear at that point would be that the Obama government comes in and creates more government reforms and laws that then restrict growth. Hence the great recovery is used against us as a reason for higher taxation, etc.
Chart of the Day