Despite reporting another large loss, Wayfair (W) surged back to all-time highs around $150. The stock that offered a appealing entry point in the $80s isn't nearly as appealing up at $150.
The company reported the following Q4 numbers:
When a company has been public since 2014 and still generates a quarterly EPS loss in excess of $1, the market typically has problems the stock. Not such the case with Wayfair.

A big part of the problem is that the company generates large losses from international operations. The other issue is that U.S. operations aren't seeing a ton of leverage despite revenue growth of 38.5% in Q4 and a revenue base of $5.8 billion. Wayfair still had an EBITDA loss in the U.S. for 2018 after a small EBITDA gain in 2017. 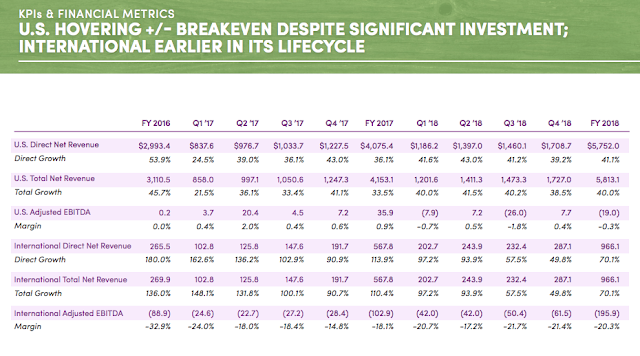 The market opportunity is large with the U.S home market estimated at $285 billion and growing to $343 billion by 2023. The problem for Wayfair is creating a large business with no financial moat to obtain what amounts to a target of only 8-10% EBITDA margins in the future.

Even with $100 billion in revenues, Wayfair forecasts an EBITDA potential of $10 billion for a stock already worth about $15 billion. If the stock surges past $150, Wayfair is a good trade for a breakout. Fundamentally, the stock isn't appealing here with large losses and no sign of leverage from higher revenues.


Vote on whether Wayfair is hitting a double top or breakout.