By Mark Holder - September 07, 2011
Walter Energy (WLT) is a leading met coal pure play not only in the US but in the world. The stock is up nearly 30% this morning on news of a potential bid from Anglo American at $120 share.

While yesterdays closing price of $75 does make a $120 bid appear attractive one needs to step back and realize that the stock traded over $130 as recent as the end of July. Not many long term investors would be willing to take such a low price.

This stock along with our favorite met stock, Alpha Natural Resources (ANR), and the sector have just been crushed with the fear of a global recession. Ironically the main growth drivers of China and India don't appear to be weakening much at all. The assets of ANR and WLT remain just as attractive as it did back in July.

ANR appears more attractive with a much larger met coal reserve base. The stock also remains over 50% below its 52 week high of $68.05.

The 'leaked' news doesn't surprise us one bit. Making a bid above $120 would be impossible unless the investment bankers can get the market price up to the $100 range in the next few months. Then when Anglo or BHP (BHP) comes calling with a $130 bid it'll only look like a 30% premium and much more acceptable to the shareholders of the acquiring company. Just how the games are played. Similar action went on when ANR bought Massey Energy (MEE) earlier this year.

Long term met coal assets remain in huge demand so don't be shocked if a bidding war ensues at prices below the $150 level. 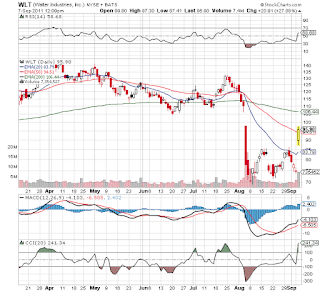 Coal said…
coal statistics would suggest the commodity isn't going anywhere. Coal reports show if we have to live with it, we may as well reduce the impact of coal and CCS seems to be the best solution found to date. Cherry www.coalportal.comWhile for some an ideal world would see no reliance on coal industry to produce electricity,
December 8, 2011 at 12:48 AM