Wow! Guess I haven't paid enough attention to the Brazil economy as I was not expecting an interest rate cut much less a 50 basis point cut. Many an investor would probably be surprised to realize that Brazil interest rates remain as high as 12% after a big rate cut.

Apparently this move caught investors off guard as the expectation was for a 25 basis point cut if at all. With inflation running around 7%, I'm surprised as well though inflation rates should moderate as material costs maxed out earlier this year. Year over year numbers will eventually subside as 2012 rolls around.

This bodes well for emerging market stocks that have been rocked this year due to interest rate increases due to rapidly rising inflation fears. Some economists think China might be done raising interest rates as well which could usher a major rally in Chinese stocks that have underperformed for well over a year now.

This move should be bullish for homebuilding stock Gafisa (GFA) which might explain why the stocks chart had turned more bullish recently. Though the government subsidizes a lot of the mortgage rates in Brazil, it clearly never hurts a homebuilding stock to have lower interest rates. Considering this stock remains down nearly 50% from recent highs back in November I'd say this is just what the doctor orders. 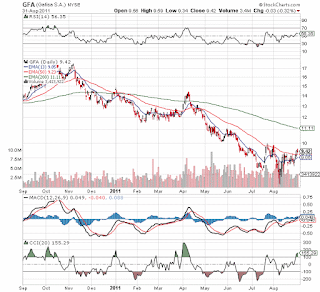 NII Holdings (NIHD) could also benefit as it is in the process of building a 3G network in Brazil and has vast wireless networks in Latin America. Any news that boosts growth in the region will help them. The stock has flat lined for the last 52 weeks so I wouldn't expect huge beta from this move.

Per CNBC on rate cut: