Strong Action in the Russell 2000 Today

By Mark Holder - June 25, 2010
Though the major indices floundered today with the Dow even closing down, the better diversified and reflective indexes were up very strong. The Russell 2000 was up 1.8% while the SP400 Midcap was up over 1%. Also, both the Nasdaq and NYSE had solid internals with roughly 70% of stocks up today.

Honestly not sure what to make of a market where the average stock soared while the huge mega caps were basically flat to down. The Russell 2000 had a solid bounce off the 200EMA which would normally be very bullish. The SP500 closed another poor week closing below the 200EMA. Most of the smaller caps appear to have broken the downtrend with former leaders like Goldman Sachs (GS) and Freeport McMoRan (FCX) breaking above the 20EMA while recent leader Apple (AAPL) struggled.

With FinReg basically done and China leading towards a soft landing its very possible that these past leaders regain there form. The real question is whether AAPL along with other techs will keep recent gains. Or are we just going to exchange leaders? We're still convinced that the market is extremely cheap, but the big stocks need to bounce soon or they'll be in a confirmed downtrend that small stocks are unlikely to break. 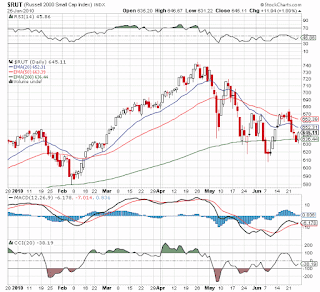