By Mark Holder - June 30, 2010
Its becoming more and more apparent that how the China market goes so goes the rest of the world. The Shanghai composite has been in a funk since July 2009 and recently fell off a cliff because of an obscure new Leading Economic Indicator report that was corrected to show a weak April number. That news alone sent shock waves around the world. The fear that China is about to collapse has caused panic in an already jittery market.

Notice in the below chart how the China market led the US downturn by just over a week (SP500 peaked on April 26). The China selloff on Tuesday signaled the weakness around the world. Notice below that the CCI is a whopping -367. That shows extreme negativity in the market. 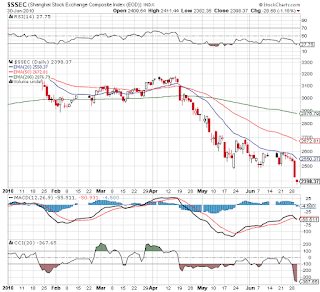 Interesting though, Copper hasn't followed China all the way down. Copper is the largest user of copper by I believe a factor of at least 3 over the US. This suggests end demand in China and around the world is much stronger then the equity markets would suggest. Copper is clearly weak but holding up well. Potentially because copper isn't as impacted by speculators as the stock market. Copper clearly has more now then in the past but it never has matched that of the stock market and especially the one in China. 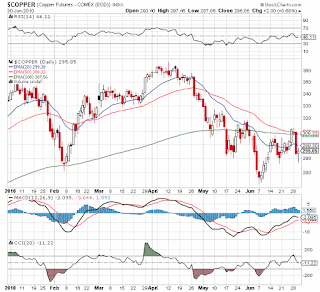 Some interesting analysis shows that China is about as cheap as it has been in decades. If you could buy in the local markets, now would be the ultimate time. The below stats are off the charts bullish.


After the close tonight, China PMI was repoted at 52.1. This number was slightly below the 53 expected by economists. Considering the 5% selloff in the prior 2 sessions I find it hard to believe that analysts really expected a minor drop in the PMI report. For China to have grown 20%+ over the last couple of years, I find it incredible that the market would be down some 60% and the worst the PMI would get is 52. Ok, sure the July number could be 51 or 50 and maybe August tumbles to 49, but do you really think the government will allow it? Would copper still be at nearly $3 if demand was about to plunge?

Regardless we cut FCX and CNAM on Tuesday right after the bell opened. In fact, we actually shorted FCX around $62.75 in the Opportunistic portfolio figuring it would be hit hard. Assuming China doesn't plunge further on this PMI number we'll actually look to cover and maybe go back long. If it can hold the double bottom from early June, we've got a great entry point. If not, the short will remain. CNAM on the other hand has been absurdly weak. The stock will be an absolute steal once the bottom has been reached.

And that bottom might not be far away as the government might step in any day. If thats the case, its clear that the time to buy is right around the corner.
China CNAM FCX Freeport-McMoRan