By Mark Holder - June 15, 2010
After falling non-stop since the end of March, it finally appears that the downtrend has been broken in Cephalon (CEPH). Since closing at a high of $72.10 on March 23rd, CEPH has continuously remained below the 10ema all the way to several days trading at $56. Today the stock not only handily zoomed above the 10ema but also the 20ema signalling a clear change of direction.

Stone Fox Capital added to the Opportunistic and Growth Portfolios a few weeks back around the closing range of $59. Clearly we got on board a few weeks too early, but the price was too compelling at now just 8x next year. Also, it was an opportunity to build up some biotech exposure after the healthcare reform was finalized.

The best part of adding this position now is that the risks are well defined. Healthcare reform is now known and the 20ema provides a downside limit. 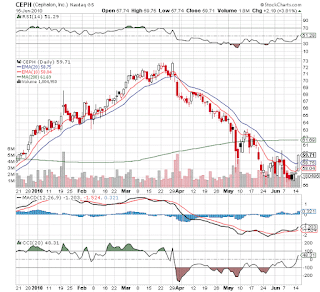