By Mark Holder - January 12, 2010
Or at least that's the headlines and synopsis of the day regarding Hartford Financial (HIG). HIG has now easily surpassed estimates for the 3rd quarter in a row. The analysts estimates for Q4 were around $.80 and HIG now expects something in the range of $1.45 to $1.60 per share. Doubling of estimates is nearly similar to what they reported in the last 2 quarters and the earnings will be in the same range as last quarters $1.56. Hard to understand why the model was so low even with HIG management providing such hideous guidance in the $.70 range. Don't analysts get that HIG was being overly conservative.

HIG has now posted over $5 in earnings for just 3 quarters and over the last 2 quarters is on a anual run rate of roughly $6. Book value is quickly approaching the $40 range. So you'd probably guess that HIG trades around $40-50 wouldn't you? If so, you'd be wrong by nearly a mile as HIG barely cracks $28 today. Sure they still have to pay back TARP funds, but at this point they can easily earn there way out without having to dilute shareholders. They don't seem to have any of the pressure that the big banks felt.

HIG has now jumped to the 2nd largest of weighing in our model Growth Portfolio at 6% of assets. In the Hedged Growth it remains a solid position at a little over 2% of assets. Considering that the stock has intrinsic value of at lest double the current price it should be aggressively bought at these levels and will continue to be held in our portfolios. 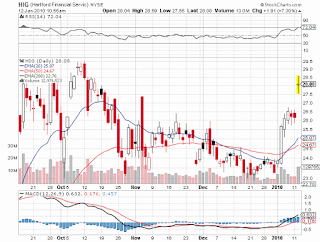