By Mark Holder - January 31, 2010
The Bespoke Investment Group has an incredible chart on the dramatic rise in the CDS default risk of financials in the SP500. It's not surprising to see periods of rising default risk as the recovery gathers steam but this is really unexplainable. The Obama/Volker plan is concerning for a small portion of profits but it surely doesn't provide this level of risk to the system. Rather it seems like spoiled 'Wall Street' crowd is using the 'fear' of these new regulations to scare the system into trading profits. After the Brown victory and the healthcare plan defeat, I'm not sure why anybody gives these plans such credence. We all know it'll likely be bogged down in Congress due to its complexity. 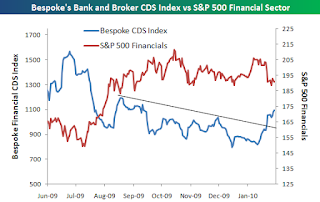 The VIX also spiked the last couple of weeks. A similar bounce took place in November as well. Will it rollover like November or are we talking about issues similar to 2008 when the VIX spiked in the 80s. Maybe this is related to the so called tightening in China as well, but it's hardly a scare at this point. The market is so easily spooked these days. China will do whatever it takes to achieve 9% growth. It seems illogical to bail on the market based on them. 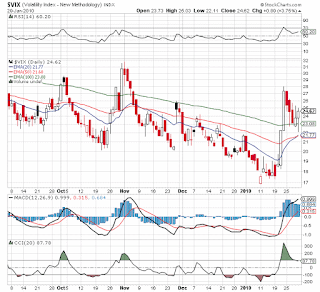 We're still not convinced this market has seen the highs for either this bull market or 2010. The Yield Curve is still around record highs and levels that predict huge future growth. Though we're watching the market for a scenario that a serious correction could lead to a double dip recession. It doesn't seem likely as corporation after corporation reports very strong profits and the Fed remains very accommodating. The Fed will likely remain easy until a much stronger stock market finally overheats the economy. After all it won't be housing that pulls us out of this weak economy.
Bespoke Investment Group Market Ramblings VIX