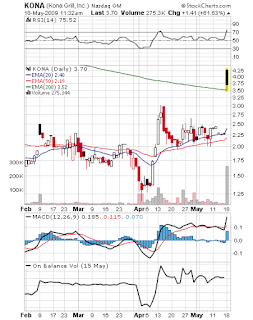 Now that the CEO that has successfully run this promising restaurant concept into the ground, Stone Fox Capital is ready to review a potentially larger position in this concept. Kona Grill (KONA) just opened its 22nd restaurant in Woodbridge, NJ. KONA has longed seemed a promising concept with its modern blend of an American grill with a sushi bar. They've been public for a few years now and they've largely been off the radar of Wall Street though they've had fast store growth and for a while strong comps. Lately the comps have fallen off the wagon posting -9.6% (yes thats negative) which was horrible considering that some of the competition actually posted positive numbers. KONA is definitely on the slightly upper end of casual dining so its not too surprising that they posted weak results but those results were jaw dropping. Mill Road Capital claims in the Q1 Conference Call (see SeekingAlpha transcript) that KONA had the worst comps in the 15 company universe they follow. Hence it was time for the CEO to go. Not to mention all the drama surrounding the recent plan to raise additional funds. Not really sure that Mill Road Capital is accurate in their claims, but its clearly obvious that the CEO was misguided in offering such a sweat deal to his father without offering it to all shareholders. Hence the rights offering.

Now how will KONA perform with the CEO gone. Lots of questions have existed with this company since the suspicious promotion of the ex-hedge fund manager to the permanent CEO back shortly after the IPO. He was an original investor, but he never seemed qualified to run a fast growing restaurant concept. The results have suffered mightily since he took over. Can they be turned around now if they find a industry veteran? Its also possible that the massive growth plan caused management to take the focus off the opened restaurants and allowed them to suffer. On an operating margin, KONA still delivers strong 17% margins on the comp base and over 15% on the whole chain. What would these numbers look like with flat comps as some competitors achieved? KONA also has a strong balance sheet with net cash and has yet to lever the company up with debt. Though they now lack liquidity at the worst time since they've continued moving forward with expansion without long term financing locked up. Hence a dilutive rights offering at just $1.35 a share.

My gut feeling is that too many 'friendly' execs were brought into the fold. Some seemed to have impressive experience, but that so far hasn't translated to better sales or more Wall Street coverage. The stock only traded 2,800 shares on Friday, 3/15. That's absurd for a company posting $80M+ in sales. Hopefully though the new guys will either prosper with Jundt out of the way or the board will move to bring in better management now that shareholders will likely have a stronger say then Jundt and his buddies.

For all the problems KONA has undergone the last couple of years, they still have posted positive growth of 7.5% in Q1 - because of the new stores. Only one store in Lincolnshire, IL has negative cash flow. That store has seen a couple of competitors go out of business of late consequently margins have improved. More on that later. And as I mentioned before, the comp store base had operating margins of 17%+ even in this horrible economy. So one wonders what the results would be with slower expansion and better focus on execution at existing stores? It sure would reduce the stress to obtain further capital in this environment. KONA is still a net cash concept with the potential of hitting $90M in revenue this year.

Speaking of competition, the closings of competitors in this rough retail environment has been a boon to the likes of Best Buy. The restaurant business has seen multitudes of closings such as nationally known chains like Steak & Ale and Bennigans. In reviewing the local papers, I've read of dozens of closings in Phoenix and Houston which surely must benefit KONA in some form in those areas. Undoubtedly every area should be facing reduced competition on a grand scale. Though the Q1 results and Q2 forecast of another -9% comps sure doesn't inspire much hope, KONA is at least surviving in order to play another day. Would be nice to find a regional or national database to analyze the amount of competition destruction that has taken place. Places like Chipotle (CMG) and Buffalo Wild Wings (BWLD) sure are taking advantage of the reduced competition and maybe trade downs. KONA should see trades downs as well from the ultra high end dinners. It just didn't seem that Jundt had an answer. It sure didn't have a plan for making KONA a household name. Heck I'm headed to both Kansas City and Dallas in June and I'll guarantee that the parties traveling with me have never heard of KONA. I'm sure they've heard of the competition whether Cheesecake Factory or McCormick and Schmidts. A few years back when KONA went public, I envisioned the day when my post IPO investment would pay off in a big way when the general public became aware of the concept. Its mostly just become an unkown commodity 3 years later. The store base is up some 150% in that time, but the stock is down dramatically.

Q2 will be a telling quarter as the market has clearly turned, but has KONA? The now ex-CEO hinted at results improving in April but he still forecast dour results ahead. Investors will rejoice with the exit of the CEO that has spent more time protecting his position in KONA, then enhancing shareholder wealth. The company could just as easily falter with this shakeup in management unless the current COO is exceptional or the BOD quickly finds a suitable replacement. At $2 and change and trading .25x revenue, KONA is an exceptionally cheap stock if they can turn around the prospects. Its probably worth a speculative investment at this level, but keep a close eye on financing and whether it appears that separation from the former CEO occurs. Mill Road Capital was interested in gobbling them up at $10 a few months back. Now without the CEO in the way and the poison pill gone this could open the door for some quick gains.

Update: Before I could even publish this article, Mill Road Capital has already submitted an offer to take KONA private for $4.60 per share. While this is an impressive 100% premium over the Friday close, I'd be hesitant to let them acquire the shares at such a low level. The concept is not in disarray. All it needs is some better management.
KONA Kona Grill