By Mark Holder - June 25, 2012
Even with nat gas prices hitting decade lows and the amount of rigs drilling also hitting decade lows, the production of dry gas from shales continues to rise. The Marcellus Shale appears to be the main if not only culprit of rising production according to the Chart from the EIA below. 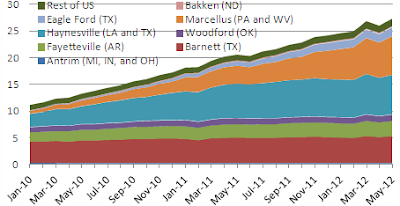 Oddly, the supposedly huge decline curve in shale producing wells was suppose to help quickly stem any price declines. Even with the amount of rigs drilling in shales plays down dramatically, it has had little to no impact on production. Possibly 1,000s of wells remained waiting completion and that has delayed the production declines for now.

Until this trend reverses, nat gas prices will likely remain low. Once reversed though, pricing could spike as existing wells deplete fast and new wells aren't being drilled. Until then domestic oil service firms such as C&J Energy Services (CJES) could remain weak. In theory, this reversal should happen soon enough.