By Mark Holder - June 16, 2012
Interesting comments from a Reuters report that came out after hours Friday. According to the report, NII Holdings (NIHD) already has 10 cities in Mexico with mobile broadband with the nationwide launch in September.

According to the Q112 conference call transcript, the CEO made it clear that NIHD would launch 3G services in select Mexico markets in late Q3. This news makes it sound like select cities have already launched.


We remain on track with our 3G deployments in Chile, Mexico and Brazil. We continue to work toward our goals of making 3G services available in Chile by midyear and in select markets in Mexico and Brazil by late third quarter and end of the year, respectively. Over the past several months, we have implemented a number of changes in how we manage the logistics and buildout of our 3G networks that are helping to keep our 3G deployments on track with our goals.


This news would be extremely positive for the stock that has been absolutely crushed over the last year.   The stock was trading in the low $40s, but delays in launching 3G services has led to bad results and an exodus of shareholders.

Either way, the question will be when will a selection of 3G phones be available for purchase in Mexico. Big difference between having service available and actual users. The stock will likely soar once investors become convinced that the networks are up and attracting high end subscribers. Will that be Q2, Q3, or even as late as Q4?

Buying this stock below $12 is incredibly attractive with a 3G launch in Brazil on the way as well. 2013 should be a great year and the stock just might reach back to 2011 highs around $45. The below 18 month chart shows just how far this stock has fallen. 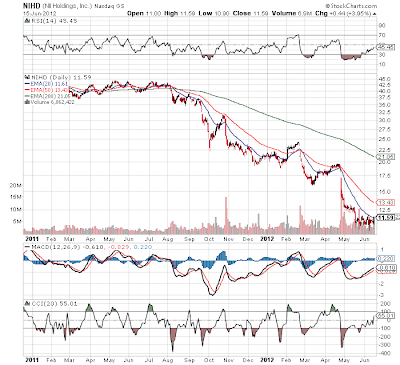 Now the real question is whether to load up prior to the Q2 earnings report or after. That report will undoubtedly be very weak, but investors should soon start focusing on the future 3G ramp. If Mexico doesn't launch nationwide until September, the Q3 report might not be that exciting either. Stock is off the charts cheap though.