Mobile Marketing In Canada Tells Us About Wireless Devices

The below infographis from JUICE Mobile probably tells the market all it needs to know about the wireless market and especially the demise of Research in Motion (RIMM).

Being one of if not the most important Canadian technology companies, Research in Motion always had a dominant hold of that market. Now JUICE is showing a dramatic increase in Android OS phones. Also, the iPhone is the number 1 phone by far. The dominance is all but gone in their home territory. Yikes!

That last part clearly highlights the issues facing Research in Motion. While it has a majority of the phones in the Top 10 devices, the demand is spread out amongst several different options making support very costly for RIMM. While Apple (AAPL) on the other hand has one phone with 24% of the market share.

Now it appears that Samsung is having major success with the Galaxy brand. Not to mention that tablets now make up 7% of the market. All of the competitors are chipping away market share faster than RIMM can produce anything new. The future clearly was dim for RIMM, but by year end it appears that RIMM will no longer hold a dominant position in Canada. In fact, if this trend continues it might drop all the way to 3rd place for operating systems. 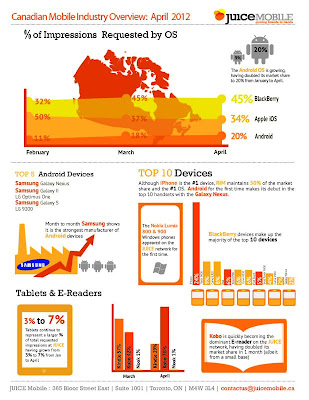 Somebody please tell me why I close that short position in RIMM last year. Depressing to have been correct and not have benefited.