Filled the Gap on the SP500

By Mark Holder - May 14, 2010
The market seems to do what it has to do and it'll always find headlines to justify the move. Today we've had nothing but supposedly negative news from Europe. Anybody find anything actually negative? Please something more then a few snippets from an old Fed President is needed.

More likely the scenario is that Mondays open created a gap in the SP500 that the market just can't stand to leave open. You won't see it on the $SPX on the market because of the sloppy open where numerous stocks are delayed several minutes before opening. The SPY though captured it. With the swoosh at the open today, that gap has been filled and in fact created another one on the opening today.

The market has bounced nicely off the $113.5 level and must eventually fill the gap back up to $116 now. That will also be where it meets the 20/50ema likely for the ultimate test of whether this market is heading back up to old highs at $122 or back into the bear market abyss. 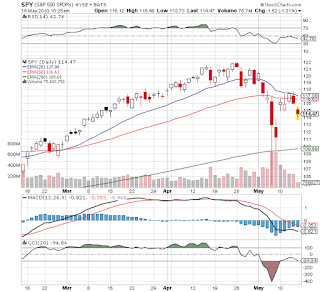