By Mark Holder - May 03, 2010
After a decade of extreme negativity for tech stocks, it shouldn't be that surprising that some stocks in the sector have PE multiples unheard of for the sector. After a decade where a typical tech stock fell some 90% from their 2000 peaks, why would investors pile into them regardless of their earnings? After all, why not buy commodity and energy stocks that have been all the craze for the last 5 years.

Teradyne (TER) is one such example trading on Friday's close at just 8x 2010 estimates and 5.5x the upper end of 2011 estimates. The stock is down some 85% from its 2000 peak around $100. What could the stock offer investors that were so burned by holding in the early 2000s? For starters, its gone almost unnoticed that TER just reported the highest semiconductor related orders in 10 years. Heck, Stone Fox Capital has been allocated some 20% into tech stocks like Apple (AAPL) and Riverbed Systems (RVBD), but we've mostly ignored the spaces such as semiconductors or communications equipment that dominated the trade 10 years ago. Not now after seeing the headlines of numbers not seen since 2010.

To backup a little, TER is the leading supplier of Automatic Test Equipment used to test complex electronics used in consumer electronics, automotive, computing, telecommunications, and aerospace and defense industries. In 2009, Teradyne had sales of $819M (remember this number for later). On the conference call, Management mentioned that the biggest drivers of growth were wireless and power management.


Q1 Earnings
Now some off the charts numbers from the Q1 earnings report on 4/21:

-Bookings in the first quarter of 2010 were $534 million of which $460 million were in Semiconductor Test and $74 million in the Systems Test Group. Book to Bill of 1.6 (remember the $819M in revenue last year)

The EPS number $.33 easily surpassed the analyst estimates of $.22. The more shocking number though was the Q2 mid point guidance of nearly $.49 compared to estimates of only $.23. Guidance of over 100% higher then where analysts had pegged the numbers. Wow! The analyst community was caught completely off guard.


Stock Action
The stock price had been strong going into the report as numerous other tech stocks had reported great numbers, but not many beat by such a wide margin. So naturally the stock price must've soared the week after? Well, actually no. A week after the report and it was back down to the low $12s where it traded prior to earnings. Leaving last Friday as the opportune time to jump into the stock when it grazed back down to the 20EMA on the market weakness. See Covestor model where we added at $12.25.


Analyst Upgrade
Piper Jaffery upgraded the stock today and raised the target to $26 from $22. Yes, that's more then 100% above the current price. Then again, its only around 15x the upper end of estimates for 2010 in the $1.7 to 1.8 range. Its amazing that it took an analyst to convince investors to buy this stock after such a great report.


Bottom Line
The market clearly doesn't believe the cycle will last. The conference call was chock full of discussion on whether customers were double booking or whether the orders were a one time blip. Time will tell, but the economy is just now solidly out of the Great Recession so it seems unlikely that a peak is at hand. TER has huge upside as the market comes to grips with the new reality in the testing of consumer electronic equipment. That upgrade cycle has clearly just started with the success of the iPhone and iPad. 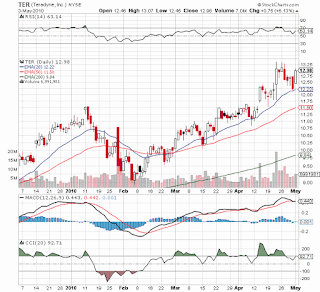