Chatter on TEX as an LBO Candidate

By Mark Holder - May 03, 2010
Not something we'd usually comment on, but the option volume sure suggests something is in the works. TEX closed at $28.18 which is close to a 52 week high. The spectacular number today is the 15K options traded for May with a large volume in the 30s. This does give some credance to the rumors of management taking them private via a LBO.

TEX has been rumored of a buyout for a while now. They've cleaned up their business via some divestures that has really solidified the balance sheet. The stock trades nearly 70% below its 2007 high and management expects earnings of $6 in 2013. Means making $7-8/share is the likely internal goal. Why wouldn't you want to take it private if the market will let you?

Not a huge fan of buyouts, but I'm not one to turn down free money today instead of waiting 12 months for it either. Not being an insider we aren't privy to all the news nor can we affect the outcomes. If TEX wants to offer shareholders $40 this week, I'd gladly take it and move on to numerous other stock ideas. Any price below that would be ridicoulus and likely induce competiting offers for something higher. See the Dollar Thrifty Group (DTG) news of the day. DTG accepted a $41 offer from Hertz (HTZ) and now trades over $50 because Avis (CAR) came along.

Sure shareholders would likely obtain a higher share price 12-24 months down the road by holding the stock, but I doubt the price would trade higher then $40 near term and we could even get lucky to get a higher competing bid sooner rather then later. Time value of money is huge in the stock world.

Management: Don't come offering us $35 and expect open arms. Get real with the first offer. 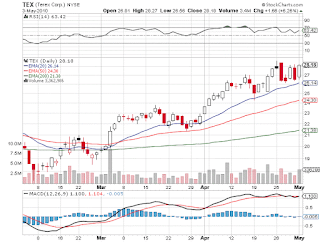