By Mark Holder - November 24, 2009
Since late September, the Russell 2000 has been particularly weak. The index of small cap stocks made a slightly higher high in mid October, but hasn't come close to the 625 high in November while the S&P500 continues to trade above the Sept/Oct levels.

Part of the reason could be that a lot of the smaller cap stocks are more domestic plays and the more international exposure you have the better. Its also been the case that financial stocks such as regional banks have been weak during that period. Regardless its led our Growth Portfolio to underperform the last month after a huge outperformance this year - up nearly 70%.

A lot of the smaller investments such as Liz Claiborne (LIZ) have been hit hard after surging. LIZ is down from a high around $7.5 all the way to $4.5. Many other examples exist as well.

Hard to explain why the smaller stocks have been so weak with the world economy showing signs of growth. They should do better in a recovering economy. Maybe people were just fearful they'd run too far, too fast. Though we've got examples of stocks like AerCap (AER) that trades at a PE of 4. Hard to argue why that stock would remain at such a compressed multiple no matter how far it has run since the bottom. Most of the small caps fell too far, too fast as well.

For now we're keeping our bets on the Russell 2000 sector. In most cases, they still appear to have the cheapest valuations even considering the YTD gains and any risk of further economic risk. 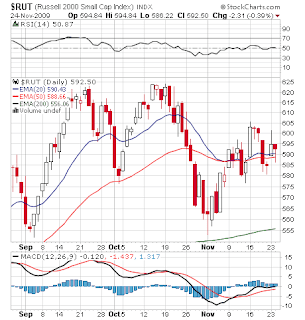