By Mark Holder - November 02, 2009
The October ISM Manufacturing report came in at a much better then expected 55.7 compared to the 53 expected and the 52.6 reported last month. It was also the highest reading since April of 2006.

This report paints that manufacturing is in a strong recovery mode with orders and production at high levels. Also very surprising was the 53 reported for the employment component which was nearly 7% points above the 46 reported last month and was positive for the first time in 14 months (CNBC reported this was the highest number in years). If employment is turning positive in Manufacturing already then it won't be long before a turn occurs in Services as well. This makes for an interesting October jobs report to be release on Friday. Looks like the consensus is for a loss of 175K jobs with about 45K coming from Manufacturing. These expectations seem much lower then what the ISM report suggests. Although employment is a lagging indicator a better jobs report could bolster the market to new post recovery levels.

*** Note: the 6.9 point increase in the employment index was the highest monthly increase since the early 1980s recovery.

Its also encouraging that this all occurred with inventories still below 50. Companies were still cutting supplies even with production soaring to over 63 and orders hitting 58. Otherwise, this ISM report would be much higher if based on actual end user demand. The inventory building cycle is likely to kick off in November.


Interesting chart from Ciovacco Capital. Notice how the ISM stayed around the 60 level for nearly a year. Now how would we see a double dip or a big market correction with such a scenario? 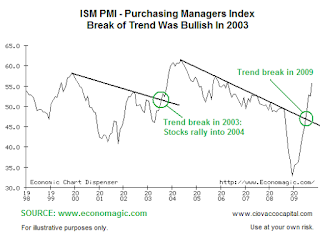