By Mark Holder - May 09, 2012
This shouldn't be a shock to anybody following this blog and our articles published on Seeking Alpha. Not only has SodaStream (SODA) consistently beaten earnings estimates, but the market had priced the stock for a absolute collapse. Even with the stock up 26% today, it trades at absurdly low multiples. The company could easily earn $3 in 2013 yet the stock only trades at $36 now with 30% growth. This is a recipe for strong stock gains.

It was also the first quarter with the report in US Dollars (USD). To most investors, this didn't make a difference but at the edge alot of investors didn't realize that main finance websites reported numbers in Euros. Just something that adds a tailwind to the stock price at this point.

Couple of very interesting points from the conference call. First, Western Europe had 50% growth or 38% excluding a one-time benefit. Considering it is the largest and most established market, most of the shorts probably counted on the ongoing European problems to hurt sells. To the contrary Western Europe remains very strong. Second, the company announced a deal to supply 2,900 Wal-Mart (WMT) stores. The deal is for 2 machines, 30 flavors, and eventually a CO2 exchange program.

Also, not surprising is that SodaStream not only beat, but raised guidance. Net income was guided up to 50% growth. This number is considerably above even the 30% growth we're using to model the future stock price.

Details from the Q112 report:

Remember that his stock hit nearly $80 last summer before concerns popped up regarding earnings potential. Now several quarters later the earnings potential has come through near the expectations back then. In essence, the market freaked out about nothing not that buying the stock at $80 was very wise back then. 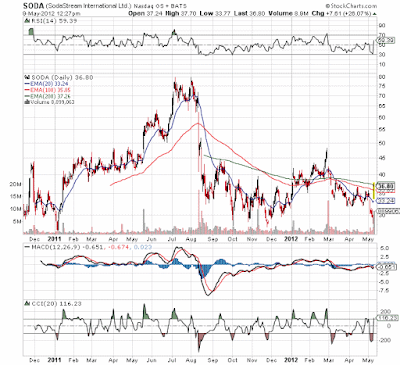 Could the stock see another run to that price? The numbers sure suggest that would be possible, but this market is very difficult to judge. Profitable growth is questioned while non-profitable revenue growth is rewarded. Also, SODA needs to lose the connection with Green Mountain Coffee (GMCR). That company has turned into an ugly situation that has hurt this stock. Though similar concepts, Green Mountain Coffee is roughly 10x the size of SodaStream amongst numerous differences.