Another Rate Cut In Brazil

By Mark Holder - May 31, 2012
How many rate cuts is it going to take to kick start growth in Brazil? The 50 basis point cut is the 7th cut in a row and marks a drop in rates to record lows of 8.5%. While many apparently doubt whether growth will be kick started, this unprecedented move will undoubtedly usher in huge growth as 2012 ends.

Combined with the country getting ready for the World Cup in 2014 and the Olympics in 2016, these rate cuts will put growth into sizzling status for 2013.

The amazing part is that interest rates have now dropped below the 8.75% reached during the financial crisis in 2009. What happened next was boom times for the stock market as 2009 ended and 2010 started. Unfortunately that's when the Bovespa peaked in this cycle.

Back then, inflation kicked up big time as commodity prices plunged in 2008 and then rebounded sharply by 2010. The year over year change over amplified some of the inflation fears back then.

The two amazingly pieces to this story is that first interest rates remain very high compared to the developed world. Second, the first rate cut took place in August of 2011 and is just now impacting the economy. So prior to even knowing whether the first rate cut has worked the central bank has slashed rates another 6 times.

One would have to assume that within the next few months that the rate cuts would start having major impacts to the economy. Then, the problem the central bank faces is that the recent cuts will continue pressing the economy more than 12 months from now.

The rate cut was a slow down from the recent 75 basis point cuts in March and April so maybe the cuts are finally winding down. Economists only expect a drop to 8% by year end suggesting future cuts might be very limited.

Chart of the Bovespa over the last 3 years 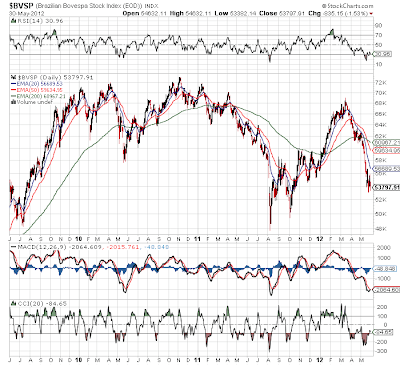 Once the market turns around, investors must simply own Brazilian stocks probably up until the World Cup starts. The economy should be booming up till it starts.